I don’t want to criticize a kid playing Teen Jeopardy. But if you have a name straight out of a cowboy movie like Jackson Jones, you can never be slow to the draw. Like ever. Even if it’s to Avi “Sundance” Gupta and his double six-shooters. 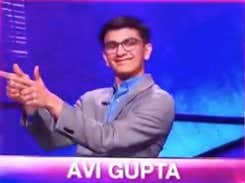