I’ll make this quick. Here’s the transcript of the clip Tate posted where he said I was “talking trash.”

How he came to that conclusion is beyond me. If that’s “talking trash” then I’m guilty. I hate to air him out, but now I feel like I have to. Mostly because his entire blog is nothing more than a cry for attention. Which is ironic considering attention was the last thing he wanted when he was on Barstool Idol. For those of you who don’t remember, he quit the competition to further his career as a high school girls basketball coach in rural Ohio. Something about not being able to “handle the pressure”. At least that’s what he told me when he cornered me in the kitchen of the old office with tears in his eyes. (We’ve met).

It’s just annoying because this is the type of shit that happens when you hire fans instead of talented people with original thoughts.

Kinda busch league that Pat wants to start this fight in June, which is the one month out of the year where I look like an asshole for clapping back at him. Pat, please respond in July and let’s make this a fair fight. But I will say I’m still confused as to why he dislikes me in the first place? You would think someone named Gay Pat would understand that the 2nd A in LGBTTQQIAAP stands for Ally! I thought we were all allies here at Barstool? I thought it was Barstool vs. the World! But apparently Pat wants it to be Gay Pat vs. Straight Tate. And all because of page views…..?

Hit pieces that make no sense. Maybe it’s because he’s not here to take the temperature of the room, but you’d think someone who considers himself a writer would have a better grasp of what their coworkers consider cringeworthy.

I get it, though, he’s trying to stir the pot while at the same time suck the dicks of some of his favorite celebrities.

Oh, and Francis, if you were just trying to stir the pot, it definitely worked. I want no part of you though…..you would dance around me in circles with your words. I’m a huge fan of yours. And Willie and Large, same goes for you. I love Barstool Breakfast (way better than The Cousins) so much that I even took a picture on the streets with Za, although he didn’t even recognize me.

Something I wouldn’t normally expect from a campy lesbian. 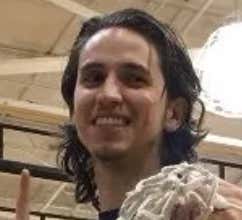 Whatever. I’m over this. The whole thing is so try hard I’m embarrassed to even write this. The Rough N Rowdy offer still stands though. If Tate wants to fight me, I am 1000% in. I won’t even train and I’ll go in hungover. It’s a win-win. He gets the attention he wants and I get a fat check. I know he’s a “keyboard warrior” (his words not mine) so it probably won’t happen, but this could be good for both of us. We can call it “Delusional Part Time Blogger Trying To Make A Name For Himself VS Pat.” Think about it, you little c***.