I’ll admit that I am always amazed by the reach and reaction that Barstool gets on TV. But how about Don Nelson casually admitting that one of his buddies just straight up died during a game, they played around him, and that story somehow doesn’t end up being the talk of the internet the next day? I guess Pres did indeed do it again.

Anyway, back to the story, because it is truly unbelievable. Did Nellie somehow know this dude was without a shadow of a doubt dead and 100000% couldn’t be brought back to life or something? Did they see his soul leave his body as an angel strumming on a harp and his eyes had X’s on them, which as everyone who has ever watched a cartoon knows signifies definite death? Because that’s the only way any of this makes sense. Then once they decided he was dead, did they continue to deal him in the hand and bust his balls like they would at any other game? I mean we already know Nellie is into that hippie shit and the way he treats a dead body going to the great beyond is probably different than most. But holy fuck that is weird.

However, I will say that this guy looked like someone that wouldn’t want to rock the boat as his buddies were playing cards, smoking stogies, and cracking jokes on their night away from the fam. There’s more than a little Larry David in that man’s face and I could see Larry being at peace if they just rolled him over and completely ignored his body until the night was over. 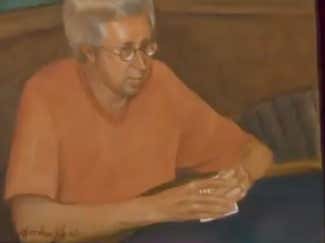 And before Bryant Gumbel asks, the answer is yes. This is the most unpleasant story I’ve ever worked on. Shameful.