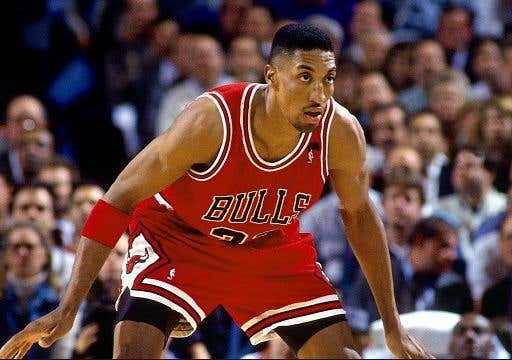 (Chicago)–The legal battle over a trashed mansion between NBA Hall of Famer Scottie Pippen and lawyer-turned-stand-up-comic Lindsay Glazer Woloshin isn’t over yet.

Earlier this month, Pippen amended his lawsuit to accuse an unexpected person of vandalizing his Fort Lauderdale, Fla., mansion: Glazer Woloshin’s 5-year-old daughter. The amended lawsuit says the girl defaced his property with crayons and markers and that her vandalizing ways show Glazer Woloshin and Jacob Woloshin failed as parents.

It also added negligence and vicarious liability to the original accusations of conversion and breach of lease.

Pippen is suing for $109,317.62 to reimburse his trust, Scottie M. Pippen Revocable Trust, for the damages done to the six-bedroom mansion.

This story is about 3 weeks old, but it wasn’t on the site as far as I can tell and it needs to be because I don’t think there is a single person I hate more than Lindsay Glazer at this point. Look at this quote

“Who would have ever thought that Dennis Rodman would be strengthening relations with North Korea, and Scottie ‘no tippin’ Pippen would be the crazy one suing little girls?”–Lindsay Glazer

Lindsay Glazer is a standup comic, I guess. Well Lindsay, this joke sucks and so do you and your kid. When you rent someone’s home you can’t just LOL when your kid draws on the walls. And also 5 years-old is old enough to know that you should’t take your crayons and draw all over the place. It’s old enough if you’re not raised by shitty parents at least. I mean that kid was 4 years old, how long was she left alone for by her parents if she was able to do $100k worth of damages to the wall? An hour? Two hours? I mean call Child Services in addition to the police because that is preposterous. And how about…just pay the man. This shouldn’t take legal action. It should take about 60 seconds. Explain the situation, give a sincere apology, and then write Scottie a check. Don’t try to topsy-turvy the entire situation and make Scottie out to be the “crazy” one. That little girl deserves to be sued. If you do the crime, you do the time…or pay the damages. And in case you don’t really remember, Scottie is going to defend his turf and make your life miserable. That’s what he does. That’s why he owns a Florida mansion and Lindsay Glazer is just renting it. Roll the film