So CBS launched this yesterday in response to the other Barstool Poker production acting all #TeamBarstool, even though the person in charge has gone out of its way to distance myself from poker related activities that I may or may not have been invited to as well as blocked me from all of their accounts. I, for one, don’t care. Haven’t for awhile. Which is why, when he went out of his way to unblock me and send an open invitation to his podcast (conveniently when I was doing well in a WSOP tournament and it would’ve been good for him and his brand), I simply said “No Thanks”

CBS did not take kindly to the #TeamBarstool part: 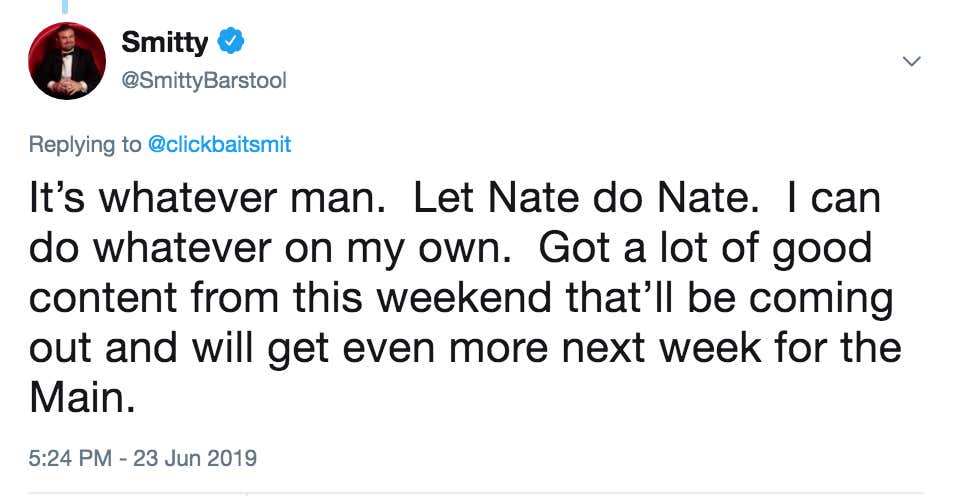 Which resulted in this:

Cute. Viscous, but cute. Look – Nate can do Nate, I can do me, and we’re good. I went to Vegas over the weekend and got a lot of solid stuff for both gaming and poker (the latter of which will be coming out later). Nate is…doing whatever he does for Barstool now. Everyone and everything can co-exist. But after the outright awkwardness on radio yesterday, I’m thinking about putting a muzzle on CBS yet AGAIN to ensure nobody really gets hurt. Sure, I like a little competition and fight, but there’s no fun in literally beating a dead horse. Mercy may be the best option. Now, CBS doesn’t like or respect my thought process. He wishes to go absolutely nuclear. But he will obey my decision for now, and that’s where we’re at with both CBS and Pocket Rockets. We shall see where it all goes from here. Maybe there can be content in the future resulting from this, maybe not. Till then, here’s to the good ol’ days.