OK. Tom Brady’s a Bay Area Guy. It’s only natural that he’d spend a June day on the links with fellow Bay Area Guy and 68 year old rock icon Huey Lewis. I just have one issue. But first, for you in the under-30 crowd, a brief history lesson on Huey Lewis is.

Back in the 80s, a magical time in American culture that was all about pushing boundaries, nothing was off limits and anything was possible, Huey Lewis was one of the few pop music stars who didn’t give you the impression he’d kill you, rape you, or have you waking up in a puddle of your own sick after a meth-fueled orgy that involved ritual human sacrifice to one of his demon gods. He seemed like a regular guy. One of us. Someone you could throw back beers with in the stands at a Giants game and have a normal conversation with.

Nailed it. And of course, he not only wrote the songs for “Back to the Future,” one of the most perfect movies of all time, he had a cameo:

One fun fact about Lewis you should be aware of is the urban legend – probably true – that he is in possession of the biggest dong in Rock ‘n Roll. Some of the most celebrated groupies in the profession have spoken of it with wonder and awe. If our astronauts could’ve described the miracle of space travel as poetically as they described his majestic wang, we’d have colonized other worlds by now.

So for sure, Huey Lewis has earned the right to be strapping his bag into the back of a golf cart next to the GOAT’s. My only issue is: What the hell is up with this picture? 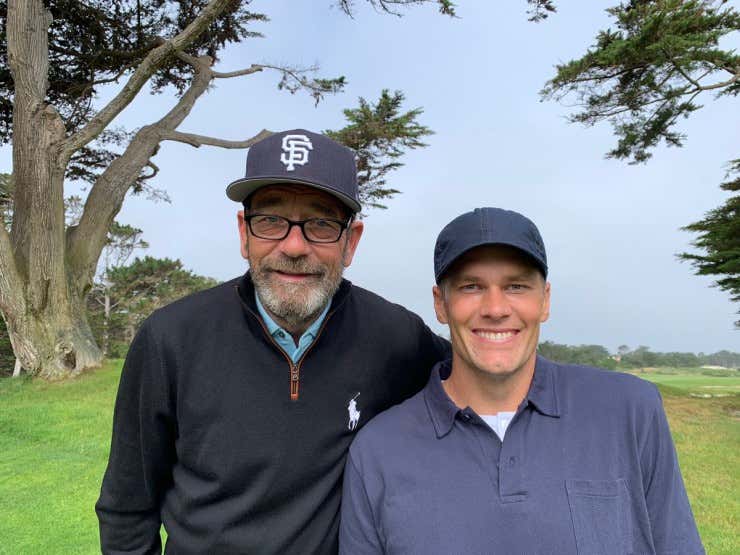 Seriously, is that Photoshopped? Brady’s shoulders look like he’s got a hunchback. He’s got a dad shirt on. His face is way out of proportion for his head.  I mean, THIS is a Tom Brady photo:

On his Instagram he looks like peak Patrick Swayze gene spliced with prime Tom Cruise and had a baby with Chris Evans. That Tweet by Huey Lewis looks one of those stand up boards you see at amusement parks where you stick your fact through the hole to make it look like you’ve got a dragon body or something. If that’s the case, if it’s really just Photoshopping, I’m not even mad. In fact, I’ll write to Huey to find out how it’s done and post me and Tom at the golf course, at the beach, him at my house for a BBQ. Basically I’ll make it look like 2019 is “The Summer of Old Balls and The GOAT.” If not, and that picture is legit, someone needs a new phone because that is atrocious.