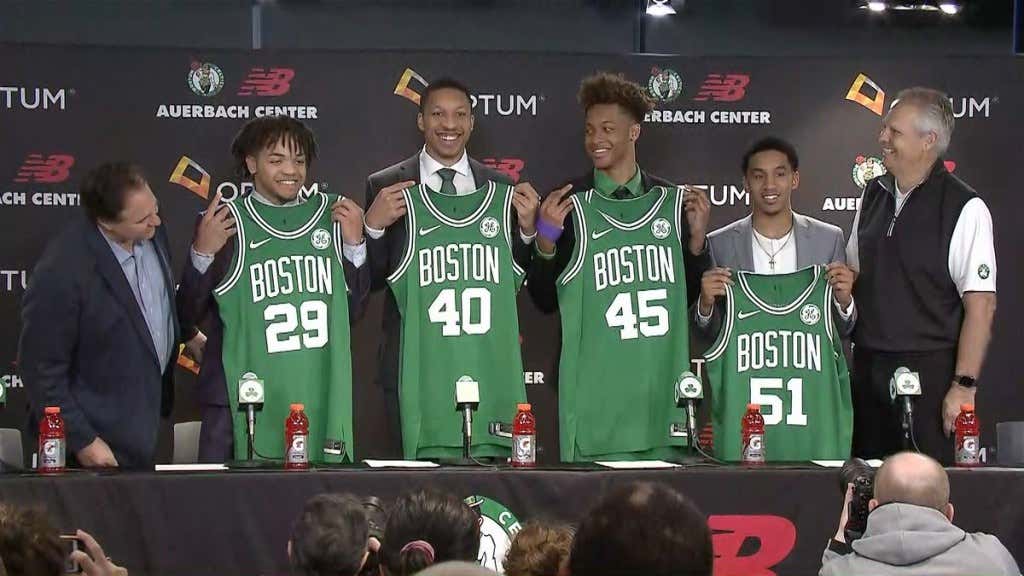 So today was the introductory press conference for the Celtics 2019 rookies, and even though there were far more players than we all thought heading into the draft, it certainly is an intriguing collection of talent. It also made me chuckle to myself when we saw everyone’s numbers because it was a quick reminder that when you bring in four players to a team that has 95% of their numbers retired, there are going to be some weird selections. In the event you were wondering (because of course you were), here are who in my opinion are the best Celtics to ever wear these numbers

Holy shit, this a quick trip down memory lane of the brutal stretch that molded my Celtics fandom that I didn’t really need. Woof. Anyway if you missed the press conference here are some highlights

It’s pretty much what you expect at these sort of things. Everyone says the right thing and nothing is really all that controversial. You get the overwhelming sense that there was a theme to this draft, as each of these guys seem to be anything but drama and genuinely good people. It wasn’t until after this press conference when Ainge had his moments with the media that he shed some light on something that I think we can all agree was a gigantic issue with last year’s team. See for yourself

I mean how much clearer can he be. Ainge was asked if these guys don’t turn into big time players if their character can still have a positive impact on a team. While that context is important, remember this is Danny Ainge. You have to be able to see what’s not there. To me this is him admitting that this team had an issue with people who made coming to work a chore, didn’t accept their role, and made life miserable for everyone involved. It snowballed into a huge issue that most likely was a driving force in this entire season being a complete disaster. Do a couple people come to mind that fit that description? Is it all that surprising that Ainge clearly felt this way and then drafted high character guys? Sounds to me like he knows some bad eggs may be out of the picture now. Sometimes before you can fix your talent issue you have to fix your chemistry issue because without solid chemistry your talent means dick. I point you to the 2018-19 Boston Celtics as my evidence for that theory.

When it comes to how these rookies will turn out, it’s really anybody’s guess. There is potential for sure, but nobody really has any idea. My takeaway from this class is Ainge found guys that have skill sets that can help, but more importantly are not going to be drama. That may seem like a waste of draft picks, but after the season we just went through I have no problem taking fliers on guys late in the draft who could surprise you while also are willing to accept their role. That’s a nice change of pace for sure.