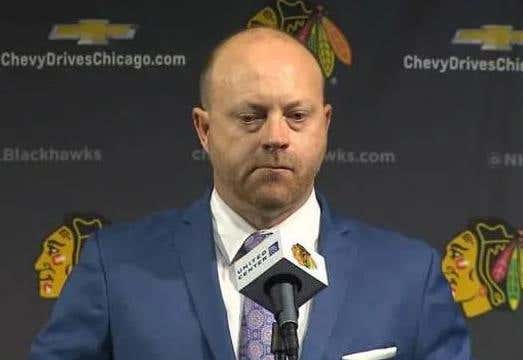 Earlier today Pierre LeBrun wrote the following for the Athletic.

(The Athletic)–My sense is the Blackhawks don’t plan on a lot of UFA action early this week but that could change later in the week. A source suggested the Hawks are more focused on trades early this week. And I think part of that is that the term it’s going to take to sign most UFAs on the market isn’t terribly appealing to a Chicago team that has a good cap situation. A year from now, the Hawks don’t want to be in a position to have to shed assets just to sign their RFAs. So for now it’s about trades where there are players out there with shorter terms left on their contracts. But obviously, if that doesn’t work out, the UFA market will also come into play.–Pierre Lebrun

Basically, the Hawks exploring trades and/or standing pat in free agency. Pretty disappointing and irritating. The Cap didn’t go up to $85M like some had hoped, but maybe the Blackhawks shouldn’t have spent $4M of that cap space on Olli Maatta because he’s an average at best defenseman who should probably be getting 3rd pair minutes, matchups, and situations. Kind of expensive. Anyways, how the team improves, I don’t really care. I understand wanting to be cautious since the Blackhawks will need to pay Debrincat and Strome next summer, but the Blackhawks have been telling us for YEARS that they’re making moves to have cap flexibility so they can spend and be aggressive both with trades and free agency. Well now is the time because it’s running out. I want Dzingel. I would like Anders Lee or Pavelski. I want a team that can get back to the playoffs NOW. And I open up an article from a respected hockey insider saying that they’re going to possibly do nothing and it’s depressing.

Then a few hours later…

I mean what in the actual fuck. Pause please…

Now look…as a general rule of thumb, I think I trust Lebrun more than the 4th period guy. It also helps that the logic and math appear to be on Lebrun’s side. The biggest take away here is that nobody knows anything. The Blackhawks always seem to keep everyone in the dark. Nobody was mentioning Kirby Dach as a real possibility until hours before the draft. Now the Hawks are seemingly about to do it again and this time they have the assets and cap space to make it extra explosive. I am clinging to every article, every tweet. I thought Panarin was impossible, but now there’s a glimmer. There’s a gleam.