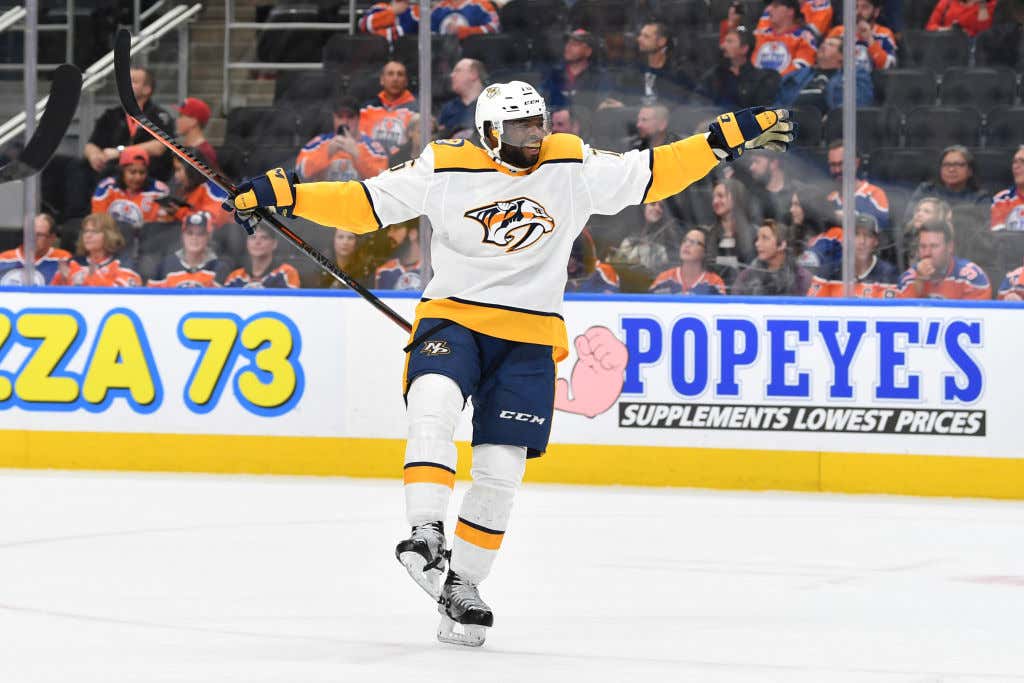 So where could Subban end up? I think he is in a Nashville Predators jersey to start next season, but who knows, we have seen much crazier shit happen. So let’s take a look at some of the teams I think would make a move for Subban.

The Devils have a TON of cap space, like almost $35 million in cap space. So taking on Subban’s $9m would be no problem at all, granted it would probably cost them someone like Kyle Palmieri or Miles Wood. I think this is probably the most realistic option. Subban would love playing in New Jersey too, he would thrive in the big city lights of NYC. I feel like the Devils just want respect and if they head into next year with Jack Hughes and P.K Subban added to their roster, they’ll get just that.

The Avs are another team with a ton of cap space, the most in the NHL actually with over $36 million. Is P.K. Subban what the Avs need right now? No. They essentially have a Subban in Tyson Barrie. But if the Avs and Barrie can’t come to an agreement on a new deal who knows, they’ll need a puck moving defenseman and Subban is just that.

Yes, it’s crazy, I know. But I have a weird feeling the Maple Leafs could acquire Subban this summer. Why you ask? Well, they need help on defense, there is no question about it. They are rumored to be shopping Nikita Zaitsev, which would open about $4.5m in cap space. So if the Leafs shipped Zaitsev ($4.5m AAV) and Nylander ($7m AAV) to Nashville in exchange for Subban ($9m AAV) then Toronto adds some much needed help on the back end and saves $2.5m in cap space and Nashville gets the 2nd line help they needed (Nylander) and adds some more depth on the back end with Zaitsev.

We have seen that the Flyers are not fucking around this offseason. With the addition of Kevin Hayes, Matt Niskanen, and Justin Braun, Flyers GM Chuck Fletcher is showing that he is going for it all this year and going for it all will be pretty tough with Matt Niskanen as your highest paid defenseman. Granted, Ivan Provorov is an RFA and will be getting a new deal any day now for north of $5.5m, so Provorov will be the highest paid Dman on the team, but they still need help on the back end. With rumors flying around that the team could be shopping dman Shayne Gostisbehere, they could package him and someone like  JVR in exchange for Subban and 1st rounder and everyone is happy. Or maybe Couturier for Subban straight up.

This one doesn’t really make sense for the Rangers but it is something I could see them doing. The Predators are looking to upgrade their second line and Chris Kreider would be a great fit. Being that Kreider is a rental because his deal is up at the end of the year, that would allow the Preds to basically get off scotch free from the Subban deal. The Rangers have been loading up on young, talented prospects so would it make sense to bring in a costly defenseman? Especially when they already are paying Kevin Shattenkirk and Marc Staal $12m+ and are going to have to be Trouba an arm and a leg. But they have a ton of cap space and need to get fans in the seats somehow, so I wouldn’t be shocked at all.

Who knows where the 2019 NHL 19 Cover Athlete will end up next season, hopefully for everyone’s sake it is a cup contender because seeing Subban spend the summer gallivanting with the cup would be the content the NHL needs.