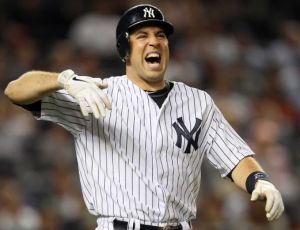 NEW YORK — Mark Teixeira’s injured right wrist will need surgery after all. According to a release from the Yankees: “After a recent MRI with dye contrast was performed on Mark Teixeira’s right wrist, New York Yankees Team Physician, Dr. Christopher Ahmad, along with Dr. Melvin Rosenwasser and two other New York-based hand specialists (Dr. Michelle Carlson from the Hospital for Special Surgery and Dr. Keith Raskin from NYU) confirmed that the sheath has not adequately healed. Surgery has been recommended to repair the tear on the tendon sheath of his wrist.”

Well isn’t this fucking splendid! We have no first baseman, no third baseman, no shortstop. Our pet’s heads are falling off! Anyone still disagree that having ARod and Jeter back in the lineup may help push us into first place? Or should we just ride Overbay and his .239 average into the Wild Card? Use your heads you idiots.