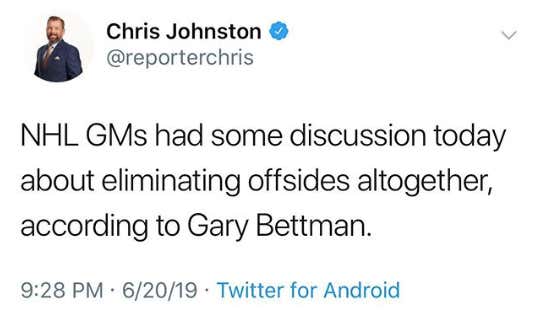 So the tweet from Johnston has since been deleted and he has tweeted the clarification that the NHL isn’t looking to completely get rid of the rule, but looking to make some significant changes to it.

I can’t wrap my head around a game of hockey being played without offsides. I don’t think guys like Phil Kessel would leave the offensive zone….ever. Like zero chance. They’ll get traded before they leave the offensive zone. I actually don’t think they could make a bigger rule change right now. That would change the entire game of hockey and scoring would increase ridiculously.

I understand why the NHL wants more scoring but I think it is as simple as eliminating the offsides review. If the refs miss it the offsides, then it’s a goal. Nothing causes more headaches for the NHL than this stupid fucking rule. It makes zero sense. The NHL wants more scoring yet they are taking goals off the board due to 1/8th of an inch of a skate being over the blue line.

An NHL will no offsides would be like NHL Hitz or arcade mode on NHL 19. People would just be running around killing each other scoring like 20 goals a game. I’d just park someone in front of the goalie the entire game and just tell my team to ice it.

It doesn’t look the NHL will be eliminating offsides completely but changes are coming. Bettman spoke with the media on Thursday and announced the changes that will take place next year.

Shout out to Torey Krug too who will basically be the last person to ever lose his bucket and be able to go lay someone out. Sucha shame. Every player dreams of scoring a no bucket goal, hair just flowwwwwwin.