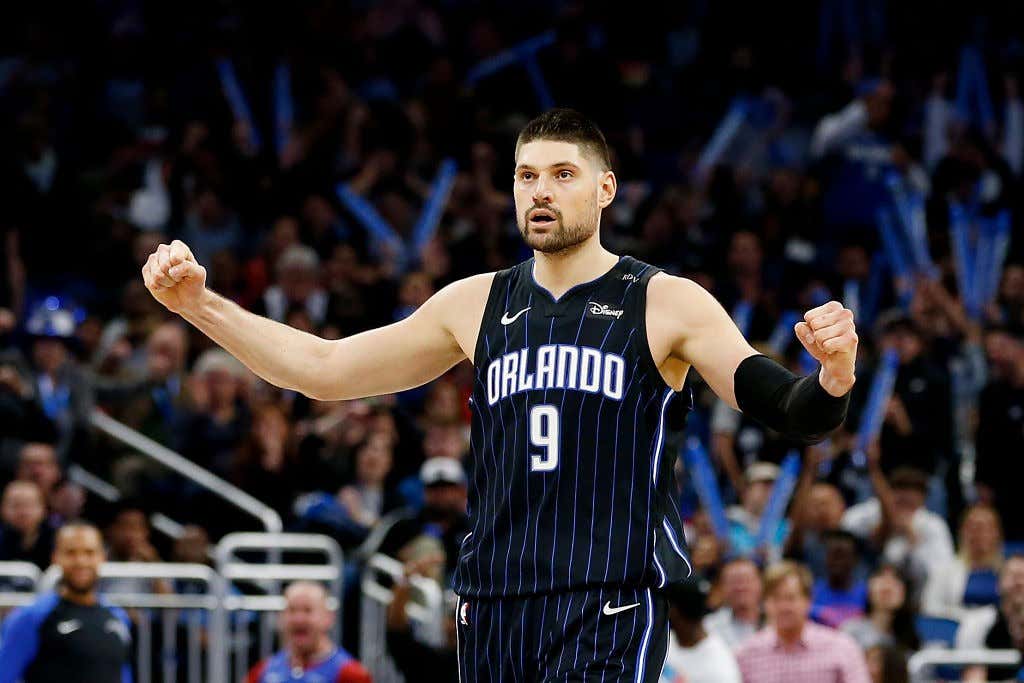 Yesterday morning before we even took our morning piss we all got the Woj bomb that the Celts were looking to trade Aron Baynes. Naturally the internet piled on Ainge for being a snake instead of using their brains and realizing that Baynes 100% asked to be moved once it became known that Al Horford was on the way out as well. Then we got the official move last night

Even though Celtics fans knew this was coming, it still hurt to see. Hopefully that cheap asshole Robert Sarver does the right thing and buys Baynes out so he can sign with whatever contender will have him. After making this move, it put the Celtics in an interesting position in terms of cap space

They also didn’t take a big man in last night’s draft, and it’s clear that center is now very much a position of need. We’ve already heard about the rumors for Clint Capela, but there was another name thrown out last night that may actually be the guy Ainge is targeting.

You may remember Vucevic as someone who absolutely destroys the Celtics every time they played the Magic. He’s a 28 year old big who put up 20/12 on 51/36% shooting who made his first All Star team this past season. He’s going to be expensive there’s no doubt, but again the Celts did just open up all that cap space and it is a position of need so it’s not crazy to see the reasoning there. Maybe you like the idea of Steven Adams better who is on shorter years and less money, but if we’re talking style fit Vucevic certainly fits that mold better than Adams in my opinion. He’s shown over the last two years he can effectively stretch the floor and knock down threes which is important for a Celtics center to do, and if you are someone who gets a hard on over 20/10 games that’s basically what he is. I’m always a little worried when a guy has the best year of his career in a contract year, but Vucevic’s production has been consistent enough in ORL where I think this is just who he is.

On the defensive end he actually had a really solid year last season. A very respectable 103 Drtg, 4.7 defensive win shares, the 5th best DPRM among centers, and while he probably isn’t the bet fit in terms of stopping someone on the perimeter like Horford was, he isn’t exactly a gigantic negative on that end either. Losing Horford and Baynes leaves a gigantic hole on the defense end in terms of the frontcourt, but there’s no reason to think Vucevic can’t at least be respectable on that end as this team retools.

For me it really comes down to the price. He may not be worth max money to some, but what if it’s 18-20M a year? That may be unrealistically low depending on his market but who knows. Vucevic also lines up closer to the timeline of your youth movement so there’s that to consider as well. If you look at all the center candidates we’ve heard about from Capela to Adams to Vucevic, there’s no denying that Vucevic fits closest to how the Celtics like to play so I get Ainge’s interest.

Now there’s also the reality that if you spend on Vucevic, I’m not sure how you also afford D’Angelo Russell who is another guy being rumored to the Celtics. There are reports that the reason the Celts are opening up this space is to pursue a point guard and not a center, and that’s certainly possible. Personally I would rather have the young big man given how the roster looks right now because I will go to the grave that defense and rebounding are the biggest factors to this team’s success.

We don’t often hear leaks of where the Celtics are targeting so that was a little weird to hear after all the action last night, but it does tell us that Ainge is certainly up to something.

So now I’ll ask you, would you want to roll the dice with Vucevic or spend elsewhere?