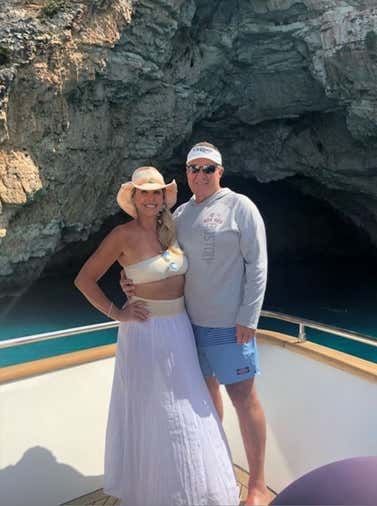 If the word “success” could be reduced to its purest form and depicted in imagery, this is what it would look like.

Bill Belichick and Linda Holliday are vacationing in Cephalonia, the largest of the Ionian islands and the sixth largest island off the coast of Greece. And few places in the world could be more appropriate for the world’s most powerful man.

Cephalonia was founded by Cephalus of Athens, son of the gods Hermes and Herse. His physical beauty was such that Eos (aka Aurora), goddess of the Dawn fell in love with him, carried him off to Mount Olympus and ravished him, with his faithful hound, Laelaps (aka Hurricane) by his side. If there’s a more perfect metaphor for Belichick than a handsome god with a loyal dog being carried off by a beautiful goddess, I’ll be damned as to what it could be.

More to the point, this is what we should all aspire to. My sainted mom raised me to be too much of a gentleman to look up what age Linda is. But if you’re younger than her and have stopped wearing two-piece bathing suits, you need to ask yourself what you’re doing wrong. If you’re not at the top of your profession and the absolute king of all you survey the way he is, it’s time to take a long, hard look at yourself and figure out why.

In the meantime, every other executive and coach in the NFL needs to do some serious introspection of their own, as this man is halfway around the world in paradise with the love of his life, enjoying the spoils of the victories he’s achieved over them. And ask themselves why they’re working 52 weeks a year, pulling 20 hour days and sleeping in their offices and getting none of his results.

And Belichick? He simply needs to enjoy the time off, relax, rejuvenate, and probably scheme 10 new ways to disguise his Cover-2 4-underneath zone coverages while he does it. And, as the great Jack Donaghy put it, take your reward. Take .. your .. reward.