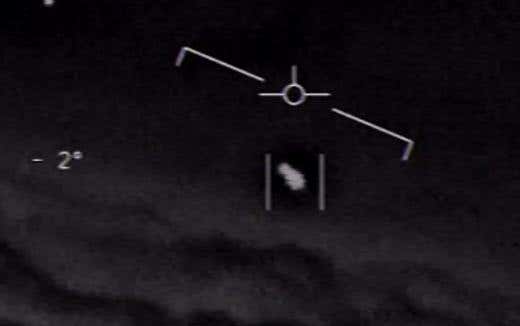 (Business Insider)–The Navy said in a statement that there had been “a number of reports of unauthorized and/or unidentified aircraft entering various military-controlled ranges and designated air space in recent years.

“These kinds on incursions can be both a security risk and pose a safety hazard for both Navy and Air Force aviation.”

It said it had updated its procedures for personnel to report UFO sightings in response to the incidents.

According to the New York Times, a number of pilots have reported close encounterswith unidentified objects which flew close to their aircraft. Pilots described to the Times seeing objects that were cylindrical in shape, performing impossible maneuvers at high speed off the east coast of the US.

In 2017, the Pentagon set up a program to study increased number of sightings of UFOs travelling at high speeds and performing seemingly strange maneuvers in protected military airspace.

The program was set up following a request by former Democratic Senator Harry Reid of Nevada.

President Donald Trump in a recent interview with ABC News claimed that he “doesn’t particularly” believe in UFOs when asked about the recent sightings by US Navy pilots.

Ooohh baby. Here go. People are having real, high level, discussion about aliens in an official capacity. It’s only a matter of time before Trump tweets something out confirming they’re real. For the time being the President’s offically stance is

This is the LAST meeting I would want to be briefed on. If the Pentagon sat me down and was like hey Ryan, aliens, you were right all along. Aliens are totally real and we’ve been in contact with them for years”. I’d be trying to hold back telling people that he had sex with Jan

Officially there are no aliens, butttt…..ALIENS. THERE’S ALIENS!

And then I would disappear and people would ruin my name because I couldn’t keep my mouth shut about the one thing I wasn’t supposed to. Which…is why I don’t really believe whatever these people, and presumably President Trump, have been briefed on isn’t actually aliens. Can you imagine anyone, especially Trump, being able to keep that secret? No fucking chance. That guy would just smirk and say that he doesn’t know, but like then tell everyone he knows that he knows something but he can tell you until you beg him and beg him and he goes “ok, but you have to swearrrrr not to tell” and he drops that bomb. Aliens. So no, I don’t think these UFOs are actually aliens. They’re probably Russian or Chinese aircraft and they’re spying on us and we are fucked.