Is that who we think it is under that backwards Detroit Lions hat, hoodie and compression leggings? Let’s review what little evidence we have to go on.

An African-American gentleman with really strong hands. The ability to snatch/grab the ball away from his body. To make a “C” with both hands and see the spiral all the way in until its secure, the way they coach it up at all levels. He he appears to have some length to him. And a very impressive build under those layers. Plus he’s catching passes from Tom Brady. I think we can safely confirm that there is a very good chance it is this guy: 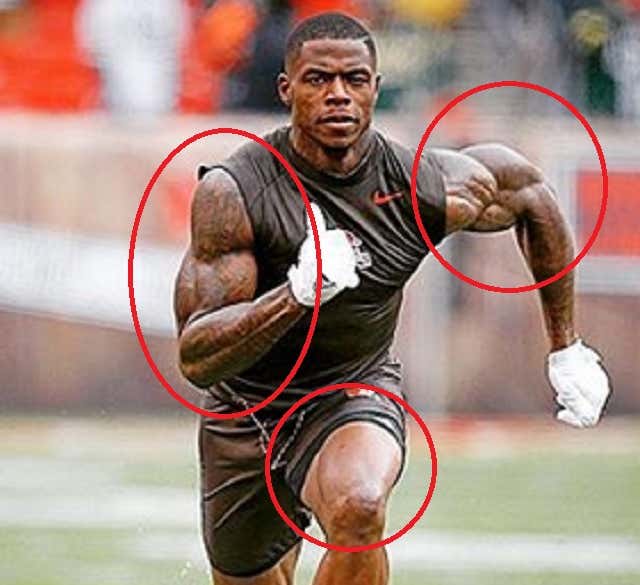 Or to use a standard that sounds like “absolutely positively” to practically all of America, I’m going to say it is more probable than not that I am at least generally aware this is Josh Gordon.

What does it mean as far as his status? I honestly have no idea. When you’re suspended under the league substance abuse policy, you’re forbidden to work out with teammates. Whether than means you can’t have a catch in their backyard, go to the gym with them or sit in the drive through at a Sonic talking like douchebags the way TV seems to think all men do, your guess is as good as mine.

If Gordon’s status has changed since last season when he was suspended indefinitely, no one is saying. Every private conversation the President of the United States has with foreign leaders gets leaked within minutes. But you’ve got a better shot at getting the codes or order a nuclear sub missile strike than you do getting an update on a substance abuse suspension. The last we heard about Gordon’s status change was in April when he signed a tender that will keep him in New England:

As for reinstatement, Gordon and the NFLPA are reportedly set to begin laying that groundwork for that process to begin starting in May. This all, of course, is predicated on Gordon sticking with his treatment plans and staying on the path to stable health.

But it would appear if he’s recalibrating his internal systems to their “Brady Pass” settings, then it might very well be that he’s passed all the tests and is free to work out with the team. And, possibly, start the season with them. Though that’s best case scenario and therefore probably overly optimistic. So let’s not get ahead of ourselves.

For now, we can all content ourselves with knowing that he’s leading June in receptions. And looking good doing it. That’ll do until we learn more.