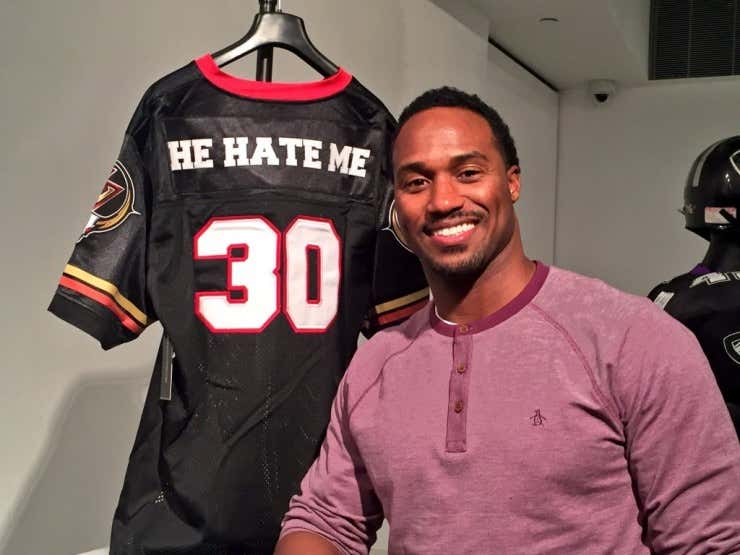 That is suddenly a very serious question, as the Lancaster County (S.C.) Sheriff’s Office has issued a missing persons advisory for Torrold “Rod” Smart, who played for the Carolina Panthers in the early 2000s and was known widely in the football universe as “He Hate Me.”

Smart, 42, was last seen six days ago at about 10:30 a.m. in Indian Land, S.C., about 20 miles south of Charlotte. A release issued by the the sheriff’s office called Smart a “missing endangered person.”

“Mr. Smart is driving his silver 2016 Nissan Maxima with NC tag PJR1759,” the release read. “It is unusual for him to be out of touch for this long. Mr. Smart’s family is worried about his safety and well-being.”

“Where did He Hate Me go?” is a very serious question, indeed. And it would be if Rod Smart wasn’t the one memorable thing to come out of the XFL 1.0.

It’s hard to believe that it’s been almost 20 years since that one season of XFL football. And Smith was the league’s only breakout star. First from using the freedom Vince McMahon gave everyone to put whatever the hell they wanted on the back of their jerseys to put an grammatically incorrect three-word motivational speech. But then playing well enough to earn his way onto the Philadelphia Eagles after the XFL imploded. He was only with the Eagles for six games, but then got signed by the Panthers and was a standout kick returner and coverage unit guy for two full seasons before injuries cut his career short. But his nickname and legend lived on.

The news of him turning up missing (always one of my favorite expressions) is especially disturbing because you’d think that would be virtually impossible in 2019. Even if you want to disappear, that’s hard to do now. A generation ago people used to worry about the government spying on them. But then we all bought the things they spy on us with. Your phone can be located. Your car can be tracked by GPS or by highway cameras. The cards you use for making purchases can tell law enforcement where you are. I’m convinced facial recognition software is decades ahead of where they say it is.

When a healthy 42 year old former pro athlete with no history of this sort of thing can go off the grid like Jason Bourne without a leaving a trail, it’s hard not to fear the worst. I hope I’m wrong and that this all turns out to be a misunderstanding. Or a stunt by the new XFL to drum up interest. Hopeful, but not optimistic. Here’s wishing that getting the word out does some good and He Hate Me makes his way back to the people Who Love Him, and soon.