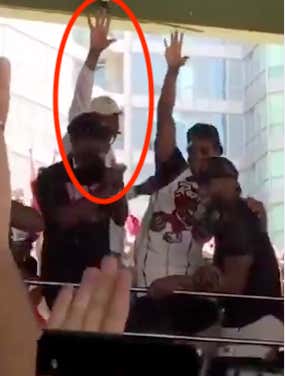 Fuck a Woj Bomb, a Shams Missile, a #BrouCrew Sources Torpeo, or whatever other kind of artillery NBA insiders can fire off in a tweet. This video is the Zapruder film of the exact moment we found out that Kawhi Leonard was re-signing with the Raptors. Because if we learned anything last year, it’s that Uncle Dennis is the man powering the machine named Kawhi Leonard. I would imagine Vegas has already placed Toronto as -1000 favorites to be the team that pays the Board Man while also putting the Raptors right next to the Lakers most likely to win the NBA 2019-20 title.

In fact until it is proven otherwise, Uncle Dennis is the NBA’s John Wick. As much a man as legend who took down an empire built over years with stories that have damn near become folklore (John Wick killing three dudes in a bar with only a pencil, Uncle Dennis shuffling Kawhi away from the Spurs like a shell game which ultimately led to them trading him to the Raptors). I bet Gregg Popovich still wakes up in cold sweats screaming about Uncle Baba Yaga taking away his perfect player. With free agency looming, we know that a billion different relatives, agents, friends, friend of friends, friend of friends of agents, and old coaches will link every different free agent NBA stars to a different franchise. But we all know Uncle Dennis is the microchip that sets the Google Maps pin for Kawhi. And that pin is apparently set to stay in The North because Uncle Dennis don’t lie*!

*Or Uncle Dennis just got hyped as fuck during a parade chant like every human not named Kawhi Leonard does because everyone loves chanting (Other than Peter Gammons). Anyway, all the nonsense I just wrote about hammered home that I am not close to being ready for the chaos all the rumors of this upcoming free agency period is about to unleash on my brain and that’s after my team’s two biggest targets either got injured or shipped to the Lakers last week

UPDATE: So, uhhhhh, maybe there is something to Uncle Dennis yelling in unison with a bunch of drunk Canadians after all…