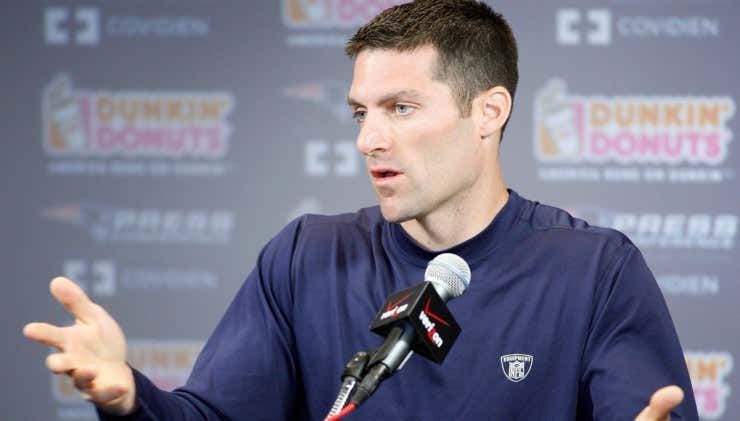 In case you spent the last couple of days like most Americans, at the beach, the golf course, following OJ Simpson on Twitter or making the bare minimum effort to acknowledge your dad’s existence on Father’s Day, please allow me to catch you up on the first colossal, lopsided ass kicking of the 2019 NFL season, the Patriots shutting out the Texans in the Nick Caserio Bowl.

Last week I mentioned how, as the 2018 Patriots were getting their championship rings at a party in Mr. Kraft’s backyard, newly hired Texans’ employee Jack Easterby approached Nick Caserio and tried to recruit him for the Houston GM job.

Now, by way of background, that is the same Jack Easterby who was the Patriots “Character Coach” or “Morality Coordinator” or whatever he called himself. Basically a glorified team chaplain. That is, until he quit in disgust when the man who signs the front of his paycheck and gives him rings that are worth more than his house got charged with being finished off by a 58 year old woman with her hand. To review, when Aaron Murdnandez went full John Wayne Gacy on Easterby’s watch, he stayed. But an elderly widower having an orgasm with a consenting adult behind closed doors in a private spa was too much for him to bear. All that scripture about forgiveness be damned, I guess.

And while Easterby was forgetting his Bible, he ignored that commandment about Thou Shall Not Covet Thy Neighbor’s Director of Player Personnel. As well as the NFL’s rules against tampering with people under contract. The first is between Easterby and his God. The second, the Patriots had some recourse and filed a complaint with the league.

As it turns out, not only was it against league rules to offer Caserio the job (not to mention the rules of decent society that say you don’t get invited to a man’s house and then just start trying to steal his shit), any contact regarding said job was a violation of Nick Caserio’s contract.

When Caserio signed his deal, the two sides agreed to a clause that makes it so he can’t talk to other teams about jobs. Not until his Patriots contract is up. In 2020. Say what you will about Mr. Kraft’s choice of handjibber specialists, but the man learned a thing or two from his dealings with Bill Parcells as a new owner 25 years ago. He knows how to hang onto the people who are most valuable to him. From Belichick and Brady to Dante Scarnecchia and Josh McDaniels and now to Caserio. He’ll pay for talent. And he probably paid extra to put an exclusivity clause into Caserio’s contract.

I’ll give the Texans a small, grudging bit of credit here because they knew they were beat, couldn’t possibly beat the rap on tampering and dropped their pursuit of Caserio. As the Scott Glenn character who captains the USS Dallas in “The Hunt for Red October” puts it, the hardest part of playing Chicken is knowing when to flinch.” The Texans knew this was the time.

I’m a little disappointed they didn’t decide to stick to their guns, challenge that clause in Caserio’s contract and fight it out. Just because I wanted their hypocrisy exposed. Before he was dead, Houston owner Bob McNair was one of the most outspoken Deflategate Truthers out there, demanding Tom Brady’s private phone be turned over and its contents exposed to the public. And it would’ve been great sport hearing Easterby and all the Texans front office staff trying to find excuses not to let the Pats see theirs. Not to mention watching them possibly have to hand the Patriots a draft pick or two. Sadly, that won’t happen now because they knew when to Chicken out.

As far as going forward, who knows? Everyone thinks things might be awkward between Caserio and Belichick right now, but I doubt it. He didn’t get to be Belichick’s right hand man on personnel matters by not being brilliant. At least smart enough to know he’s locked into the New England job until 2020 and they weren’t going to simply let him walk to a competitor. I’m guessing it’s a lot worse in Houston, now that it’s sunk in that the organization’s entire plan was based on their brand new minister recruiting a guy over champagne and bacon-wrapped scallops at a lawn party. With no Plan B. No GM in place. And poor Bill O’Brien – yet another ex-Patriot they hired away because they don’t know how else to run their franchise – having to do it all.

Anyway, it’s good to see a team that finally put together a quality season before getting smoked by Indy in the playoffs reverting to the mean and bringing back the chaos they’re accustomed to. More importantly, it’s great to see the Patriots get a nice mid-June win.