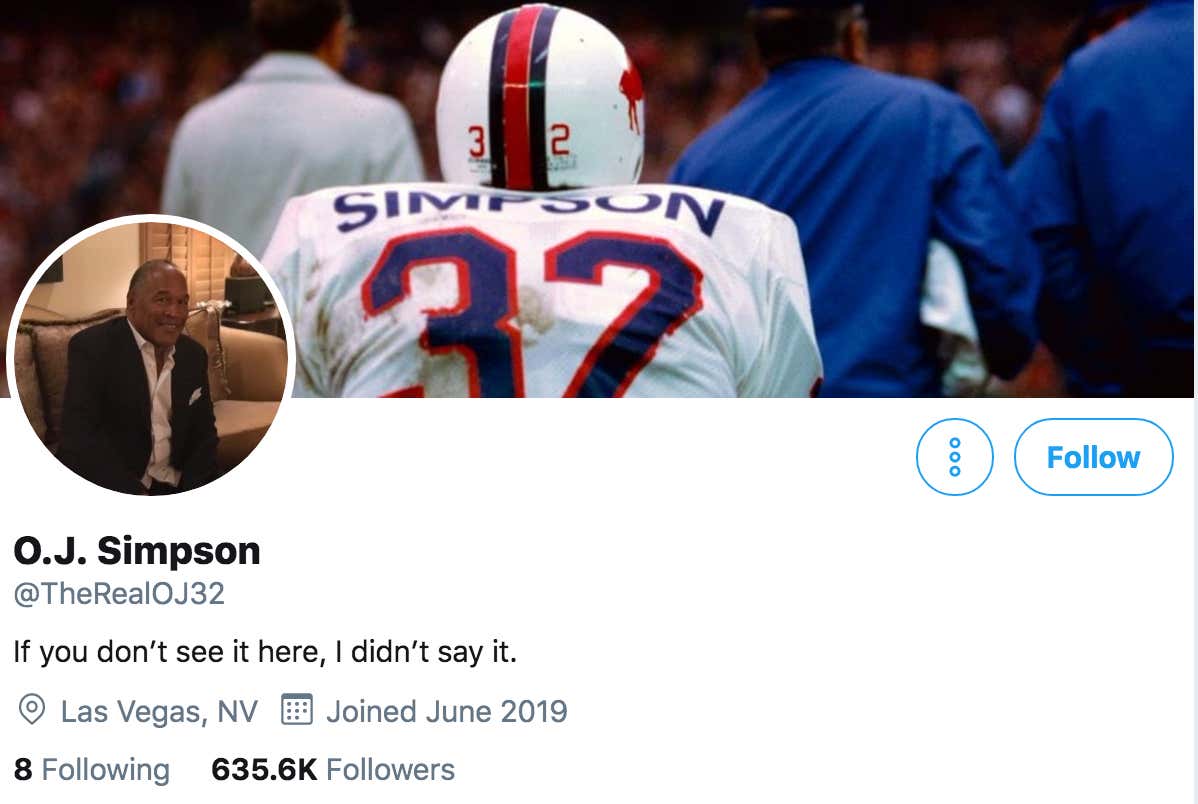 So I’ve seen basically everything that’s ever happened on the internet. And this OJ Simpson craze from the minute he joined Twitter is up there as one of the most intriguing experiments the World Wide Web has seen. Its  banana town. Its not exactly “new,” – there’s been an inappropriate obsession with OJ for the last 25 years. Somewhere along the long people lost sight of the fact that he slit the throats of two people with his own two hands, and they just viewed him as this salacious celebrity gossip story. Somewhere along two and a half decades, it changed. Today is the 25th anniversary of the white bronco chase, so the OJ saga is another thing my generation grew up on. I personally think the OJ Simpson story is the most compelling (modern) story of all time. From superstar athlete and actor to disgraced murderer to defendant in the highest profile court case in history to free man to subject of countless books, specials and TV shows, it’s a story that gets rejected by Hollywood for being too dramatic. It’s so beyond the realm of reason, we all kinda forget just how absurd it was for the guy from the Naked Gun movies to slaughter his wife and her friend. It would be like if the Rock caught a double homicide case last week and proceeded to lead the police on a low speed chase while the Raptors played the Dubs. Think about how much the world would explode from that level of superstar, committing that level of crime, and leading police on a chase in the middle of the NBA finals. It’s so common to us after all these years, so to us that’s just “the OJ Story.”

So I guess it’s no surprise that people were buzzing when OJ joined twitter. Everything else has been disconnected from reality when it comes to OJ, why would his social media presence be any different? But I dunno man, I definitely thought it was at least a LITTLE different. I will never ever judge someone’s internet habits. That’s what the internet is here for – to get weird and dark and do it all from your fingertips. Twitter is a bad bad dark place giving you access to some of the most depraved shit individuals of all levels have to offer, so I’m not acting like this is something new. But the clamor around OJ’s twitter arrival was pretty fucking wild. At the time of writing this, 600,000 people following this dude. Tommy Smokes waiting with bated breath for OJs next tweet. Notifications on, hoping for another video from OJ so he wouldn’t have to login to Pornhub tonight. This guy SLAUGHTERED TWO PEOPLE!!! Left them in a pool of their own blood!! Covered in head to toe in their DNA!!! Now he’s on twitter talking about getting even and setting the record straight. And apparently the internet is very much “here for it.” WILD.

On the one hand I hate it. I’ve watched and read everything under the sun with OJ and so I always think about the Goldman family and how desperate they always are to convey how awful it is having your child taken from you and how deplorable it was that OJ walked free. I think about being like “hey Mr. And Mrs. Goldman! Did you hear OJ is on twitter? You gotta follow him!” I mean what kinda fucking asshole do you gotta be to help build up the online footprint of one of the most despicable humans to ever live?

On the other hand, as a child of the internet, this is as fascinating as it gets. The thing about the internet is that it’s real and raw and plays by its own rules of supply and demand. If people want more OJ, you’re gonna get more OJ. A first hand account of one of the most interesting and most reprehensible humans ever is as intriguing as social media can possibly be. The internet is a free market. The people decide what’s popular. If someone has a big presence or a lot of followers or a lot of views it’s because they are giving people something they want. Usually you hope it’s a little More like “that guy is popular because he’s really clever and makes funny videos!” and not “that guy has followers because he’s a double murderer who got acquitted and humanity is a giant collection of morbidly curios true crime fetishists!” but, today, we’re talking option B. It’s grimy and it’s disheartening but it’s real as fuck. True crime dominates this era and it just turns out that the biggest true crime case of all time features a killer who’s as free as a bird to tweet till his heart’s content.

When I think about the Goldman family, it makes me feel despicable checking in to see what OJ is gonna say next. But when I think about all the other real, raw, repulsive shit I’ve seen and done on the internet, I realize it’s just par for the course. Watching people get beheaded and hit by trains and shit. Watching half naked Asian chicks crushing hamsters in high heels. People shitting in each other’s mouths. Ok? The internet was a dark place before OJ hopped on twitter and it will continue to be so long after OJ is gone.

But I will say I think you’re weird as FUCK if you’re liking OJ Simpson’s tweets. Scrambling to follow him like he’s your favorite comedian and “liking” his ominous videos about “getting even” with the world is a line I wouldn’t even cross. Maybe I’m getting old or getting a little soft but you wont catch me clicking a fucking heart on any of OJ Simpson’s original content. Now if you’ll excuse me I have to go watch a barely legal girl on a leather couch be exploited sexually, like a normal person on the internet.