It’s rare to feel good after losing 3 of 4 to the Dodgers and 2 of 7 on the road trip but here I am feeling good. And since that makes me sound like an absolute crazy person, let’s start there: Feeling Good On A Monday Morning

In isolation, yeah I hate losing 3 of 4. In fact I just hate losing period. But I’m smart enough to know you can’t think about baseball like that without losing your mind as well. You have to constantly be thinking big picture and that’s what I’m asking you to do right now. Because as our friend points out above, the 7 combined games between the Dodgers and Cubs this season literally could not be any closer. If this was the NLCS I’d obviously be furious that the season was over, but they’d have played their balls off in the process and come damn close.

Good time to remind everyone there’s another 90-something games left in the season so the question is Can The Cubs Get Better Between Now And October? And to that I’d say I Think So Right?

Some observations that calm me down:

The Dodgers performed 26% below their offensive average and still performed above league average which is insane to think about.

Cody Bellinger went 9-28 with 4 home runs and a 175 OPS+ relative to his “average” which means he was about 3x better than an average MLB player against the Cubs this year.

The Cubs posted a .589 OPS in 4 games at Dodger stadium – get the bad ones out of the way

Worst case scenario would be the starting pitchers get embarrassed. Yu Darvish contemplates retirement after a 3 inning, 6 hit/7 walk start. All the games are blowouts and Kenley Jansen only pitches Sunday to get a mop up inning. Basically like the 4 game series never happened because it never got off the ground. That would be worst case scenario.

Take solace in the fact that we got he complete opposite. Both Thursday and Friday included early Cubs’ leads against Clayton Kershaw and Rich Hill. Both games gave the Cubs the early control and both games they lost after giving it back. Then Saturday could have been a blood bath but Yu Darvish threw 7 innings of 10 strikeouts and 2 hits to keep the lineup in the game long enough to get a chance to win and that’s exactly what happened in the 9th. So when all things look like it could be 3 quick, close losses, you get a bounce back effort of epic proportion from a guy no one trusts quite yet. And then Sunday comes down to Javy Baez lining out in the 9th inning with a chance to tie it up after a bone head baserunning error from a guy who almost never makes them (Almora – probably trying not to get picked off) and a bad throw from Kris Bryant whose only notable defensive trait is having a strong arm.

If Sunday goes the Cubs’ way, we’re patting ourselves on the back for grinding out a hard fought series split against the best team in baseball. Instead the mood is frustrated and confused.

My point is the gap should be a lot closer because it really is just the small stuff inbetween the 2 outcomes.

Willson beating the shift yesterday actually made me spit out ice cold, great tasting, less filling Miller Lite and I was very mad. 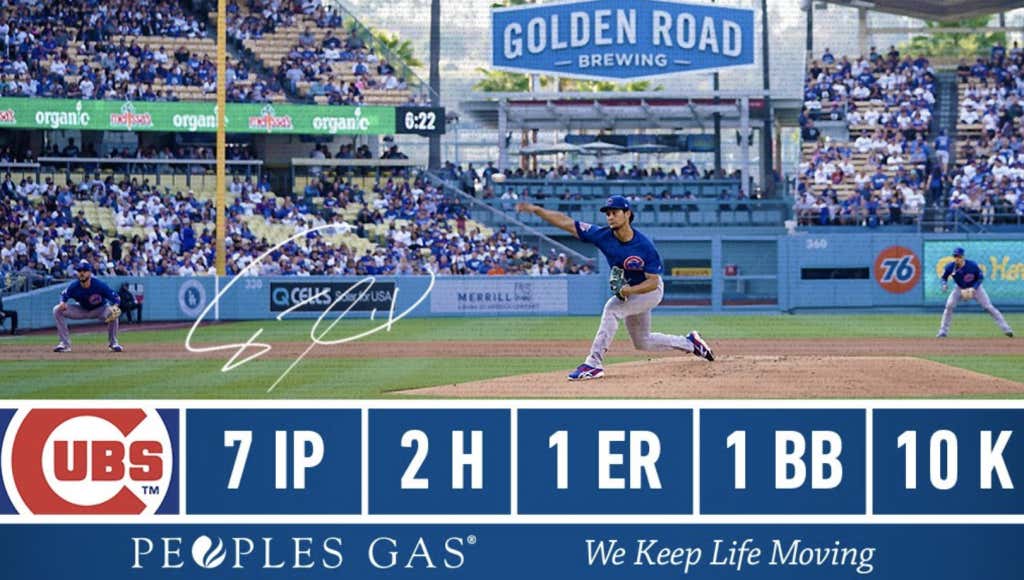 I don’t like being trolled by the Cubs btw

Rich Hill gets a beef for that reaction

That’s the kind of 7 game road trip that turns into a 10-game heater we’re talking about come award season. Hear me now believe me later Cubs in 4 except maybe against the Dodgers it might take 5 and that’s okay.