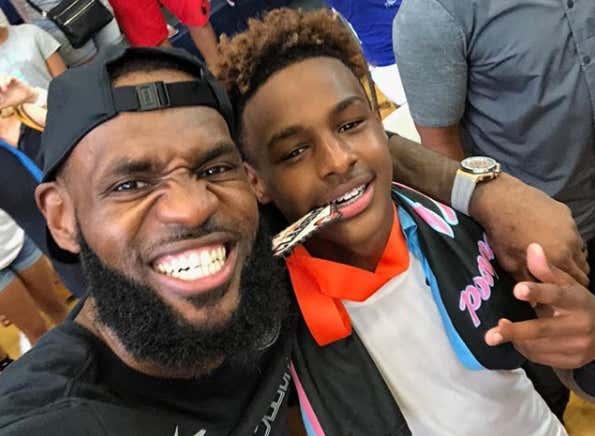 Now that all of the dust has settled from the Anthony Davis trade over the weekend, it’s time to take a look ahead at potentially the biggest wrinkle of this entire deal.

That’s because Bronny James will be graduating high school in 2022. The rules right now say that Bronny would have to wait a calendar year after graduating high school to play in the NBA but since his dad pretty much runs the entire league, I’m sure that they could appeal the minimum age rule and get Bronny into the NBA right after graduation. The only issue is that there’s a good chance that the Lakers won’t have a 1st round pick in 2022 to draft Bronny with because LeBron would rather play with Anthony Davis than his own son. But if Bronny doesn’t appeal the NBA minimum age rule, decides to go play in college for a year and then come out in 2023? Well the Pelicans can swap picks with the Lakers if necessary to grab him. Because again, LeBron James thought that it would be more important to play with Anthony Davis than his own son.

All I’m saying is that if I’m New Orleans, I’m doing everything in my power to make sure that I’m drafting Bronny James with one of those picks to come out of the Anthony Davis trade. You think about what LeBron just did to that franchise over the last few months. The only way to fully get back at him for taking your franchise star away from you is to take his son away from him.

It’s just a little sad to see how little LeBron cares about playing with his own son at the highest level. On Fathers Day Weekend no less. He’d rather have a couple of years to play with Anthony Davis than a once in a lifetime opportunity to play with his kid. Say what you want about LaVar Ball but he would never do that. And considering LaVar has put a Big Baller Curse on the Lakers, you have to imagine they’ll end up sucking ass so hard in 2020-21 that they end up with a top-8 pick in the 2021 draft. Which pretty much solidifies Bronny not getting drafted by the Lakers. What a shame.