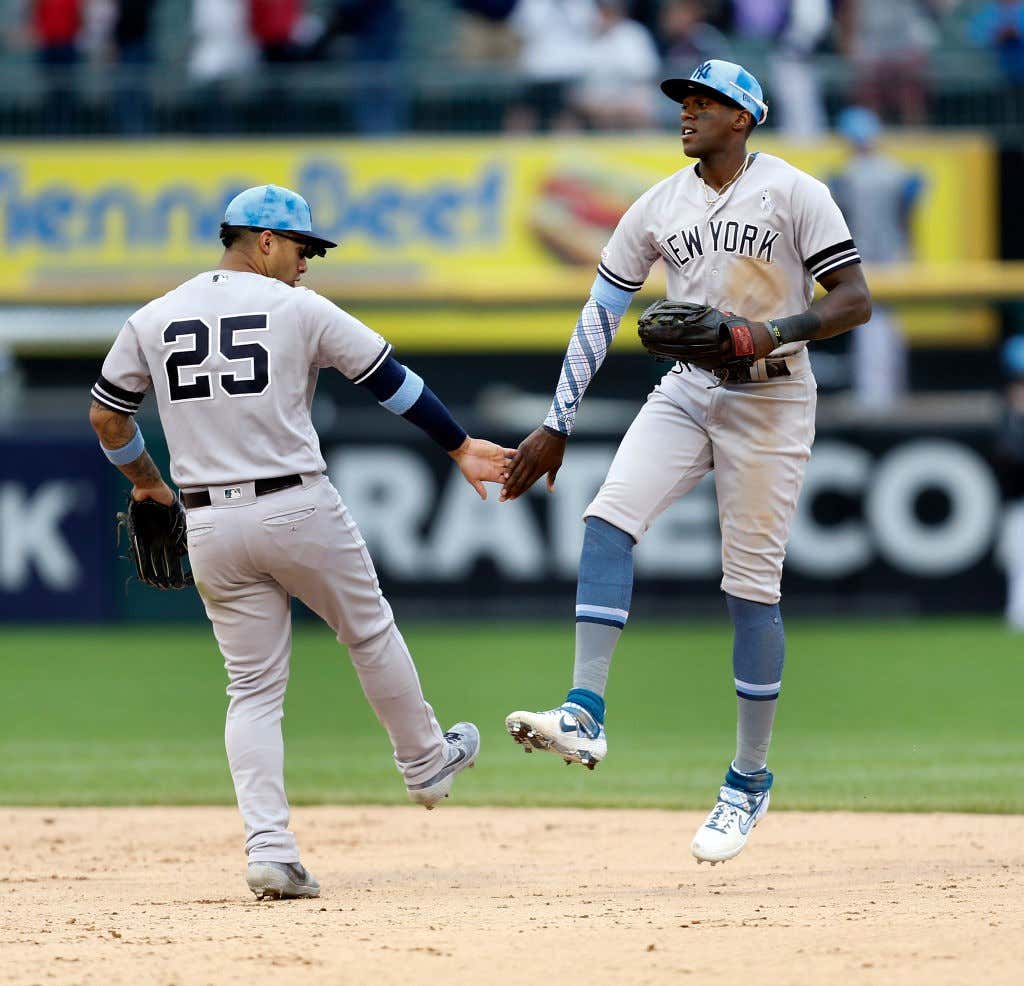 The Yankees looked BAD on Thursday and Friday. Some might say Friday night was the worst loss of the season. They looked so out of it. They couldn’t pitch, field, or hit. I get that the White Sox are playing decent baseball of late, but those two games were unacceptable. They’ve answered that with two easy wins over the last two days to give themselves some confidence and momentum heading into a HUGE week in The Bronx. Following the game we got some shitty news that Clint Frazier was to be optioned to AAA over Mike Tauchman. We’ll get to that in a little bit, but first the game today.

The Yankees pounced on someone named Odrisamer Despaigne. I thought it was going to be a rout from the start with runners on the corners in just five pitches. Well, we had to wait a tad longer for the explosion, but once they got going it was a good old fashioned steam roll. 10 runs on 12 hits, and just one homer with Maybin’s solo shot. It was a hit parade in Chicago. Two hits from DJ, his 27th multi-hit game which just seems like make believe this early in the season. Only Houston’s Michael Brantley has more (29). They also got two hits from Gio, Gardy, Romine, and Maybin. Not a bad feeling when you don’t put out your best lineup and still dominate.

James Paxton needed a good start today, BADLY. This was probably his best one since KC back in late April. Since coming off the DL he had been shaky, with his best start lasting just four innings in his first appearance since coming off the I.L. Going six innings, two runs, seven punch outs, and just one walk was just what the boys needed today. That gets his ERA below 4 which always looks better, and gave the Yanks a rare quality start.

This week coming up is HUGE. Three against Tampa. Four against Houston. Just a massive, massive, massive week. With it comes the long awaited return of Giancarlo Stanton on Tuesday. Tomorrow we’ll see the newly acquired Edwin Encarnacion, or at least he’ll be available off the bench. The Yankees had to make a move to get him on the 25 man roster and that move was sending Clint Frazier down to Scranton.

It’s the shitty part of the business. There’s only room for 25 guys and right now he’s not in the plans. Clint has proved himself big time this year at the plate. He’s got a 122 wRC+. Defensively, sure, he hasn’t been good at all, but he puts in work every single day to get better. Bottom line, he’s a guy you want in your lineup if you like winning. He’s a future all-star. Just not for this team and how it’s constructed. So what happens now? I mean with everyone healthy, there’s no room for Clint to get consistent at bats. He’ll likely be a big chip in a trade for a starting pitcher, whether that will be Trevor Bauer, Bumgarner, Stroman, or maybe somehow Scherzer. Cashman is cooking up something big, it’s just a matter of when, not if.

Next Saturday night is our second Barstool at the Ball Park of the year. Yankees vs. Astros. We’ve already sold a ton of tickets, and there’s not many remaining. Use the link below and get yours now.