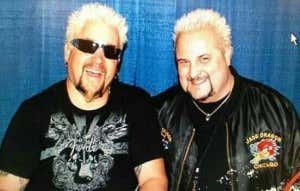 Edison Park Fieri is a professional chef, a singer/songwriter, and a great Guy on the side (pause for laughter). I’ve been seeing him and his hair in my neighborhood for 10+ years. He’s the Guy Fieri I was raised on. He prefers to be called by his actual stage name of “Joey That Guy,” but after all these years it’s like having to call Ron Artest by Metta World Peace now. The other week I spotted Joey That Guy in the crowd of a bar and for the 1st time I got to really meet the guy behind the guy.

ME: Hey man can I take a picture with you?

ME: Thanks man, I’ll add it to the collage. Appreciate it.

EPGF: No problem, you do know I’m not actually Guy Fieri though right?

EPGF: Yeah man, but I’ve been doing this stuff way before him. The hair, the cooking, everything.

ME: So what you’re saying is the real Guy Fieri is actually imitating you?

EPGF: All I’m saying is I’ve been doing this for 30 years, long before he came around, and he’s not even a professional chef. I am though.

EPGF: Man, I didn’t even care until I got banned from MGM in Vegas.

EPGF: People were coming up to me asking for a picture, thinking I was the “real” Guy Fieri. I never said I was, people just thought I was. Guy Fieri’s lawyer got wind of it and sent me a Cease & Desist.

ME: So you got a C&D basically telling you that you can’t be yourself because someone else is already yourself? I’m gonna need a day or two to process all of this, but thanks for the picture man.

Edison Park Fieri then gives me his business card, which tells me to “Google Joey That Guy” to see all of his television appearances. Doesn’t say to visit his Youtube page, doesn’t give a website where his work may be located, just says to type his name into the Google search bar. Love it. Anyway, after some investigative googling I came across an interview where he tells the reporter exactly what he had just told me.

So to recap – Look-a-like Guy Fieri is allegedly the real Guy Fieri and “real” Guy Fieri is actually a knockoff Guy Fieri. The plot twist we never knew we needed. What I feel we have transpiring here is “fake” Guy Fieri’s trying to expose “real” Guy Fieri as the fraud he is so that “fake” Guy Fieri can start being known as real Guy Fieri. “Real” Guy Fieri will then get demoted to fake Guy Fieri and Flavortown will at last have the rightful heir to the throne while Hollywood Boulevard gains a new character.  I don’t want to go full Joe Rogan v. Carlos Menica here and steal Guy Fieri’s Flavortown sash just yet because I don’t know his side of the story (or his business relationship with Barstool), but this is essentially a real-life evil clone scenario unraveling right in our backyards. It’s like the case of Buzz Lightyear v. Spanish Buzz Lightyear and it’s left up to us the people to decide which one stays and which one goes.

There’ve been many other cases like this scattered throughout history—Carlos Mencia/George Lopez, Zuckerberg/Winklevoss Twins, Dave Portnoy/Clay Travis, etc. In time all of those victims managed to expose their imitators to the world as phony, but imitation Guy Fieri is still going around pretending to be someone who’s pretending to be him, without an ounce of justice in sight. I’d prefer to talk this out above anything else, but Guy’s people have yet to get back to me in order to do so. Last thing we need here is for this to get ugly. Rough N’ Rowdy 9: The Guy Fieri (plural) Match. The fight no one knew they wanted. Violence may not be the answer, but it’s still an answer nonetheless. It’s your turn to step to the podium Guy Fieri. If that’s even your real name.