You may have heard by now but Tiger Woods used to really and I mean REALLY fuck people up. The most timeless and treasured example of that is the 2000 US Open when he finished 15 strokes better than the other 150 best players in the world. In the process, he became the first golfer in US Open history to go double-digits under par while setting a still-standing record of largest margin of victory in a major championship. There’s about 470 combined years of major championships so think about that while looking at this: 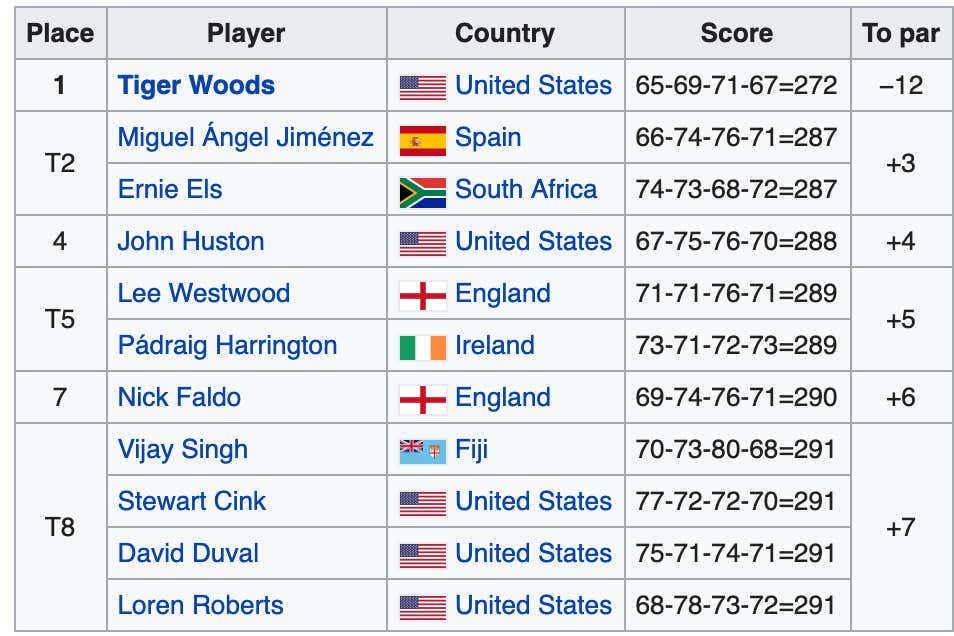 Just an insane performance from a remarkably ridiculous athlete in peak performance THAT ALMOST NEVER HAPPENED. In fact he was very nearly disqualified for….

Running out of balls?

Golf Digest – That week, Woods had put a new golf ball into play, the Nike Tour Accuracy. Woods shot a first-round 65 with the new ball, which on that Thursday was only good enough for a one-shot lead over Miguel Angel Jimenez. The following day, fog delayed the second round, and Woods was only able to complete 12 holes.

“I didn’t finish the night before [Saturday] until around 9,” said Woods. “I hadn’t putted well that day, so I took three balls out of my bag and putted on the hotel-room carpet. I normally take nine to 12 balls to the course, but I only had seven left [after Friday]. I left the three balls on the carpet; now I’ve only got four balls when I get to the course.”

At the time, Woods was not aware of how many balls were actually in his bag, understandable given how laser-focused he was that week on winning. Had he known how few he had left, maybe he would have been a bit more conservative with giving them out, but Woods gave away two more to a few kids, leaving him with just two left and six holes remaining in his third round on Saturday morning.

Again, unaware of the ball count, Woods pulled his drive into Carmel Bay at the 18th tee, leaving him with one golf ball in the bag. One bad swing and Woods could have been disqualified.

Just reading that makes me exceptionally nervous and this tournament was literally decided 19 years ago.

His caddie at the time, Steve Williams, was aware of the ball count, and did everything he could to get Woods to play smart, to no avail.

“Stevie said, ‘I’d like for you to hit an iron, just to get it into play,'” Woods said. “But I was swinging it so well, so I went with the driver. Obviously I didn’t know the complete situation: The only ball I had left was the one I teed up.

“I would have been disqualified with no balls. If you run out of balls, you’re out.”

Absolute nightmare scenario for the caddie because you know back then Tiger isn’t listening to anyone about anything. He’s just dialed in start to finish trying to murder the rest of the field and bang some hot moms, hence him handing out all these free golf balls. Classic Tiger.

So when Stevie’s standing there whispering heyyy Tiger… uhhhh you kinda only have 2 balls left I’m sure Tiger thought he was talking about blowing loads or beating up on the competition. At no point did the threat of disqualification actually register with Tiger Woods because nothing registers when you’re that Locked In.

Technically, Woods could have borrowed a ball from a competitor provided it was the exact brand and type, which was unlikely given Woods had just put the newly manufactured ball into play that week.

Of course, Woods did not, instead putting his second tee shot in play and saving a bogey, preserving the greatest and most dominant performance in golf history.

To think the greatest performance in the history of golf could have been wiped from existence over not having enough golf balls is wild. But then again history shows pro golfers are always at their best when they only got 1 left in the bag.