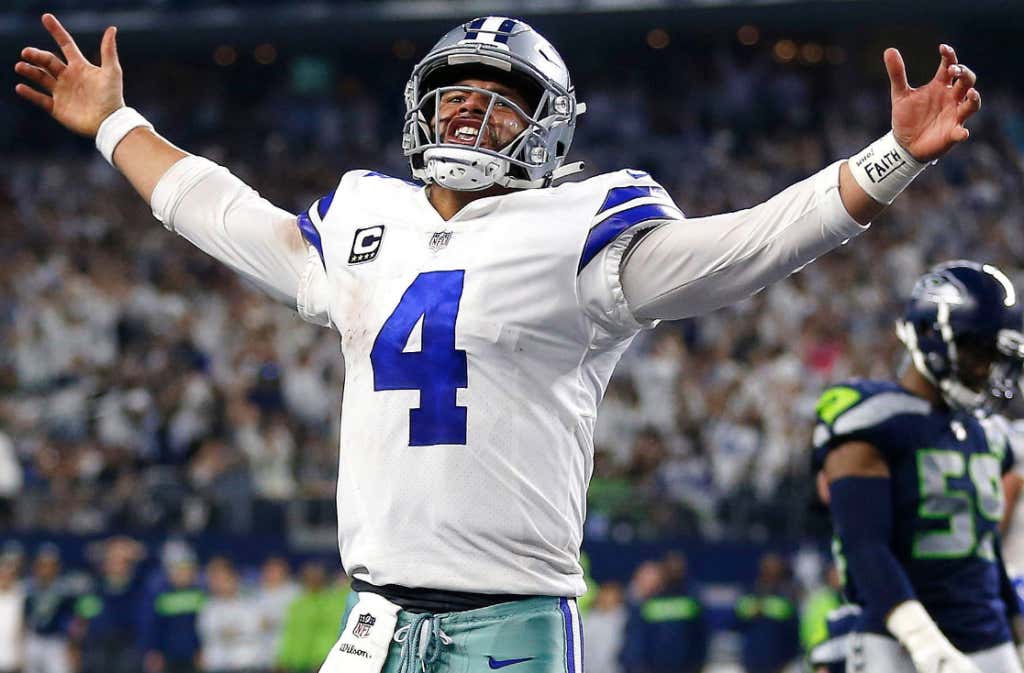 Pro Football Talk - With team-friendly deals like this, the Dallas Cowboys won’t need any enemies.

Quarterback Dak Prescott‘s agent, Todd France, has “broached” a deal in the range of $34 million per year, according to Clarence Hill of the Fort Worth Star-Telegram.

Prescott’s fourth-round rookie deal complicates these talks, because he’s saddled with a below-market salary of $2.025 million in 2019, through no fault of his own. The Cowboys, however, won’t want to rip up the current deal and start over as if Prescott had finished his rookie contract, even if the Cowboys have enjoyed quite a bargain over the past three years.

Look at it this way: A $34 million new-money annual average on a four-year extension becomes for Prescott a five-year, $138 million contract. That gives the deal an average of $27.6 million at signing, putting Prescott only $100,000 per year ahead of 49ers quarterback Jimmy Garoppolo, who relative to Prescott hasn’t done much during Garoppolo’s time in the NFL.

Let’s say Prescott wanted $29 million per year on a five-year deal. Given the current market, that’s not a ridiculous request. But the five-year, $145 million deal would translate to a four-year, $143 million extension. That’s $35.75 million per year in new money, the richest contract extension in league history.

Spoiler alert: It will be considerably more than any other quarterback has ever gotten.

Do it Cowboys!!! Do it!!!! Give Dak that record setting deal!!!! Just think about it, Jerry Jones, you don’t want to be the guy who lets Dak Prescott slip out of your hands. If you don’t give him $34 million a season, someone else will. Can’t imagine being the Cowboys and letting a superstar like Dak walk away. And Jerry loves spending the most money. He wants the biggest and the best out of everything he does. So obviously he has to give Dak the recording setting deal. It would be *so* embarrassing if he let someone else give that record setting deal. Oh man, Jerry would become the laughing stock of the league.

So hopefully Jerry Jones and the Cowboys come to their senses and give Dak that big deal he deserves. He has earned it and the Cowboys would be foolish to think otherwise. Make it happen, Dallas. Sign him up, give him $34 million a year, and be legends. You know you wanna.