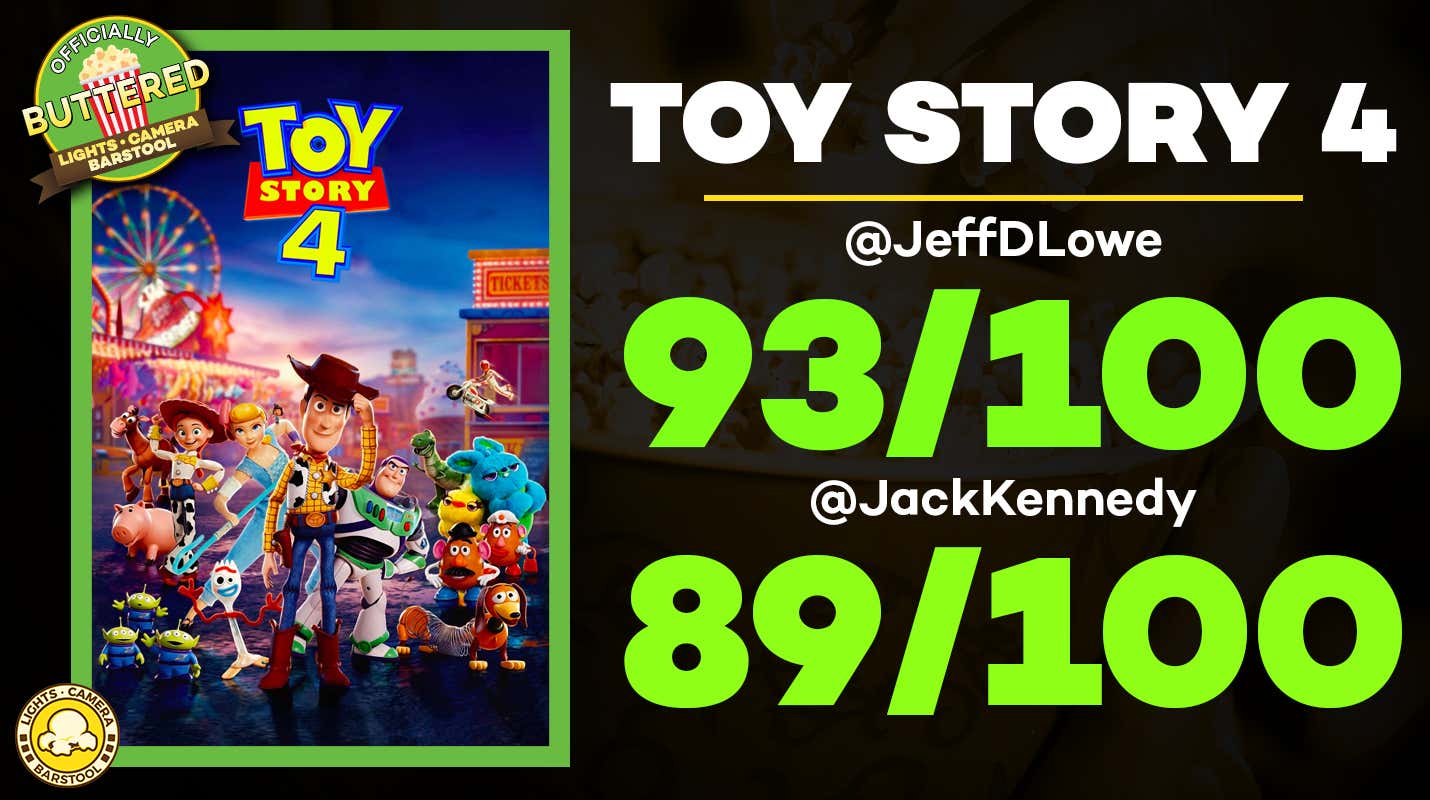 Everyone was mad that ‘Toy Story 4′ was made… but, it’s Pixar, so you have to trust the process… we saw it… let’s review it…

Jeff (93/100): ‘Toy Story 4’ is incredibly enjoyable, hilarious, emotional and fits perfectly into the franchise. With stunning animation, this adventure story will please everyone, even those skeptical of another sequel.

I will be the first to admit that I wanted nothing to do with ‘Toy Story 4’. The third movie was nearly perfect and had as good of a wrap-up as you could ask for with a classic trilogy. But the newest movie finds a way to play off of the ending of ‘Toy Story 3’ and add on with near perfection. Without spoiling anything, the themes and messages with ‘Toy Story 4’ tie you in emotionally right from the jump.

While the emotional component of a Pixar movie is huge, the characters and story (ahem… ‘Cars’) must be solid to balance out the corniness. The story is solid as hell and, like many are noting, it’s much more of an adventure movie than the previous three entries. It’s a fast-paced story from start to finish and flows incredibly well. ‘Toy Story 4’ has a great ability to juggle humor and emotion without sacrificing the movie feeling fractured or disjointed.

All of the usual characters are back and it’s like we didn’t even wait nearly a decade to see them back on screen. The return of Bo Peep plays great, but the new editions of Forky and Duke Caboom stuck out the most. Despite Forky seeming to be an annoying character in the marketing, Tony Hale’s addition to the Toy Story franchise was phenomenal. The character had great chemistry with Woody and delivered some of the funniest lines in the movie. No one is on a bigger heater in Hollywood than Keanu Reeves right now and it continues in ‘Toy Story 4’ with Duke Caboom, the Canadian Evil Knievel. Another funny new character, Caboom brings a great side element much like that of Michael Keaton’s Ken Doll in ‘Toy Story 3’.

Even the biggest skeptics will like ‘Toy Story 4’ when they see it in theaters. It’s been 10 years since the third movie but the animation looks like it has advanced 20 to 30 years (see it in IMAX). The writing is great, the story is engaging and the emotion, per usual, is dialed to the max. Somehow, someway, Pixar has made another great Toy Story sequel (even if it isn’t quite as good as the first three).

KenJac (89/100): We talk on LCB all the time about how it’s hard to make a successful sequel, and yet the Toy Story franchise made 2 off one of the most iconic animated movies of all time. I was afraid going into this movie that this would be the black sheep of the franchise, that their luck would finally run out. I’m very happy to report that ‘Toy Story 4’ is no such thing, and was a pleasant wrap up to the storyline we know and love.

All the returning voice cast members were just as good as before, and the big additions of Keanu Reeves (John Wick), Cristina Hendricks (Mad Men), Jordan Peele/Keegan Michael Key (Key & Peele) and Tony Hale (Arrested Development) were all wonderful. Key and Peele’s characters, in particular, were everything I hoped they would be and more. They were absolutely perfect comic relief that I’m sure will get some sort of independent project somewhere down the line. This was not the most emotional Toy Story (The scene I think Tom Hank’s cried at wasn’t nearly as bad as I thought), but it was easily the funniest which made it stand out among the previous movies. The last two aspects I want to point out is that the animation/visuals were outrageously good, and the pacing was very refreshing. 90-minute movies are a lost art that I appreciate more with every movie I watch.

Was this movie totally necessary? No. But was it a good movie that stands out? Yes. If you are a fan of the property or just want some genuinely great laughs, you will love ‘Toy Story 4’.

—
‘Toy Story 4′ is Officially Buttered even without Trillballins’ and the Audience’s score. Tune in to this week’s Lights, Camera, Barstool for our full review of the trash-fest that was ‘X-Men: Dark Phoenix’.