“Trust this process, this team will win a Stanley Cup. I might not have a jersey but I’ll be a part of it somewhere, somehow.” 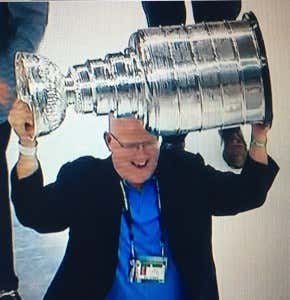 It didn’t happen overnight but Keith Tkachuk’s proclamation after he played his last game came true Wednesday night: the Blues won a Stanley Cup and, as a Blues scout, he was a part of it. And that wasn’t some throwaway line to appease long-suffering fans. Big Walt doesn’t blow smoke up people’s asses. He said it because he meant it.

Even though the Blues knocked off my team, I was happy as hell for my old pal finally getting to win what eluded him during his magnificent career. I interviewed Keith after my very first NHL credentialed game on October 5, 1996. I was interning at the North Adams Transcript and drove down to Hartford see the Phoenix Coyotes take on the Whalers in what was the debut of the former Winnipeg Jets (it would also be the Whale’s last season in Connecticut).

He was an established NHL star and I was a cub reporter making my bones, having no idea what I wanted to do when I graduated. I would’ve never imagined that 23 years later I’d be congratulating him on Garden ice about his Cup win while credentialed for a podcast I co-created (largely because we didn’t know what podcasts were in 1996). It was pretty cool personal moment of things coming full-circle for two buddies with similar backgrounds but wildly different career paths in the hockey world.

Congrats, Chuk. You earned it, brother.

(Primary assist to Tommy C. for the heads-up.)