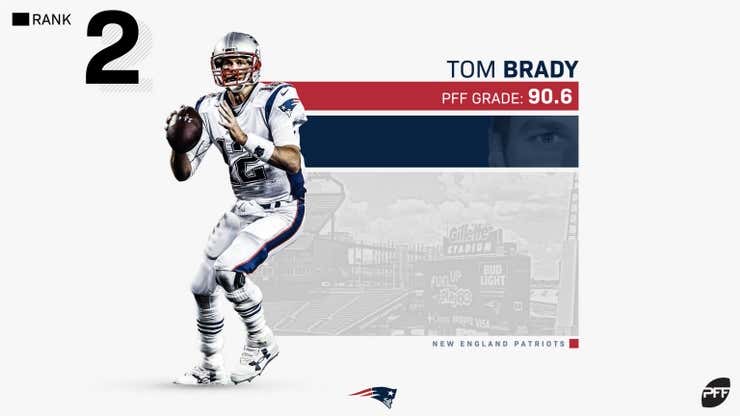 I had a talk with my brother Jack the other day to line up a golf outing and we ended up spending most of the conversation the way we always do: Talking about the Patriots. Where we think the tight end situation stands. Whether we think the Patriots are on the forefront of a return to power running when everyone else continues to go small. Stuff we’ve each picked up from rewatching the postseason games. Whether the defense has improved. Bill Belichick’s general hearthrob dreaminess. And, I say this just to give you some insight into what a non-stop adrenaline rush the life of a suburban househusband can be, we spent quite a bit of time on Pro Football Focus and whether it’s a reliable source for football analytics. This actually happened.

Anyway, it’s sort of ironic given that not 48 hours later PFF posted their complete rankings of the NFL’s Top 50 players:

Yes, he’s still the best in the business.

Even at 41 years old, Brady turned in an elite 90.6 overall grade in 2018, making it the fourth consecutive season he’s earned an overall grade of 90.0-plus. His passing grade on passes with a step of separation over the last three years leads all qualifying signal-callers, and his passing grade on tight-window throws ranks fourth on the list. Surprising no one, Brady also earned a starting role on PFF’s 2018 NFL Clutch Team for his efforts in one-score games this past season.

From PFF’s Ben Linsey in his 2018 NFL Clutch Team article:

“We kick off the list with a shocker. Tom Brady has been the standard at the quarterback position for the better part of his career, and in a year in which he took home his sixth Super Bowl title, Brady earns a first-team spot on the Clutch Team with his 90.5 grade when it mattered most. He picked up big chunks late in tight games — 1,073 passing yards on 107 attempts — and those 10.0 yards per attempt led all quarterbacks with 50 or more attempts in clutch time.” 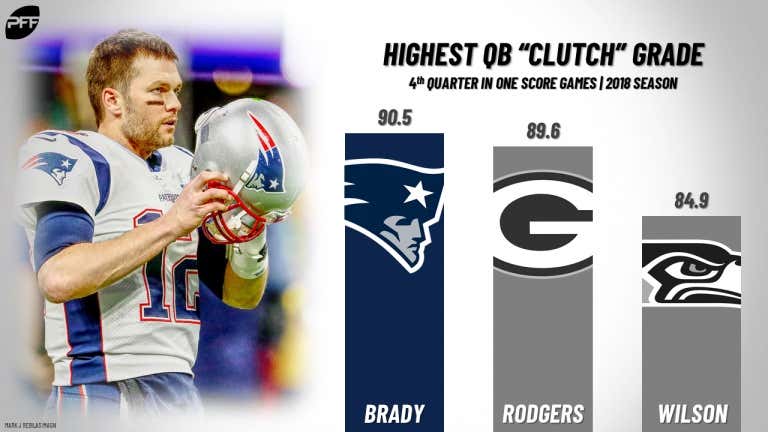 Huh. Interesting. Very interesting. We are now, what? Two years removed from people saying it was time to transition from Brady to Jimmy Garoppolo. At least four years from them saying owed all his powers to low air pressure the way Superman gets his from our yellow sun and he’d never be the same quarterback once his game balls have to be between the sacred air pressure range of 12.5 to 14.5 psi. And if you really want to go back, a good five years removed from the talk that he hadn’t won a championship in 10 years and he’s getting old and not looking too good and it might be time to take Ol’ Yeller out back behind the barn and put him out of his misery.

And yet, here we are. The leading analytics site in the land has 41 year old him as the second best player in the land. For the record, when we were discussing it, I told my brother I don’t PFF as gospel, but in general I respect their research. I wouldn’t be surprised if an NFL coach laughed at some of their data. But if nothing else, they’re a useful tool among many. And for what it’s worth Cris Collinsworth, who owns the site so is by no means objective, says he’s taken skeptics to his little nerd sweatshop, shown them the methods they use to grade each player on every individual play and says they come away impressed. So who can say?

What I can say is that I don’t believe those geeky elves sitting in their dingy offices, pouring over film in darkened rooms eschewing sunshine, fresh air and all human contact have some sort of blatant Tom Brady-bias. I do. I admit it. There’s no reason to believe they do.

And since you asked, the only guy they graded ahead of the GOAT is Aaron Donald. No argument there. He might have turned invisible during the Super Bowl thanks to (L to R) Joe Thuney, David Andrews and Shaq Mason as well as Dante Scarnecchia and Brady’s ability to get the ball out quick. But that doesn’t mean he wasn’t objectively the best player in the NFL over the last few years. And I’ll happily have Brady take the Miss Runner Up in this particular pageant, just as long as he got the 9.85 carat ring instead of the tiara.

Second best player in the NFL. I guess this is what Brady’s cliff looks like. I like it.