The White Sox started their rebuild on December 6th, 2016.  They did so by trading a future HOF pitcher in Chris Sale, followed shortly by trading solid big leaguer Adam Eaton, and lastly by trading Jose Quintana to the North Side.  There were ancillary trades mixed in there, but those were the Big 3 that launched the Sox into their worst stretch as long as most of us have been alive.

Simply put, they went scorched earth.  Tore it down to Bare Bones.  Here are their payroll breakdowns by year since the Sale trade:

Those were DARK times for White Sox fans.  The majority of the fanbase understood the direction the front office elected to take the franchise but it didn’t make it any easier watching a product that was just brutal top to bottom at its highest level.

Attendance and TV ratings plummeted.  Major news outlets forgot the team existed multiple times.  Literally.  And as injuries piled up with draft picks, prospects in both MiLB and The Show underperformed and a failure to land a “whale” in Harper or Machado, the fanbase started to revolt.  People wanted Hahn and Kenny fired, Reinsdorf to sell, and for Guaranteed Rate Field to be burned to the ground.  I was somewhat in that group.  MOUSE.  I gotta say, it sucked ass.

They have yet to add any “big boys” but were obviously in it until the end on Harper and Machado.  No, that didn’t work out.  But those contracts aren’t totally working out for San Diego or Philly right now, either.  Both players are doing okay, but at ~$30MM against the collective bargaining tax good?  For sure not.

The White Sox have the opportunity ahead of them to attack 2, 3, or 4 players this offseason that will collectively produce better than Harper and Machado do, for about the same rate.  So…. it’s probably for the best the White Sox didn’t land them.  It would have hamstrung them for years.  Now they absolutely, positively HAVE to spend on premium talent to complement this young core this offseason.  That’s the final step to building a team that will absolutely contend in a dog shit Central Division for the next 6+ years.

But as we sit today, the young guns look goooooood.  Especially Lucas Giolito.  It could be argued that if the season ended today, he’d be the Cy Young.  Sure Verlander is dominating again, but the gap isn’t too crazy if a gap even exists.

And tonight the White Sox have the opportunity to get back to .500 in a month not (early) April for the first time since they were 50-50 on July 26th, 2016.  Go ahead, laugh your tits off.  I deserve it.  The White Sox deserve it.  But I’ll remind you that since December of that year, they have actively been trying to lose.  They completely gutted their big league team, assembled one of the best farm systems in baseball, and shed payroll to the point where they were operating with one of the least expensive payrolls in all of baseball for the last 3 years.

But everything is finally coming to fruition with the FO’s plans.  Here are the current AL Wild Card standings: 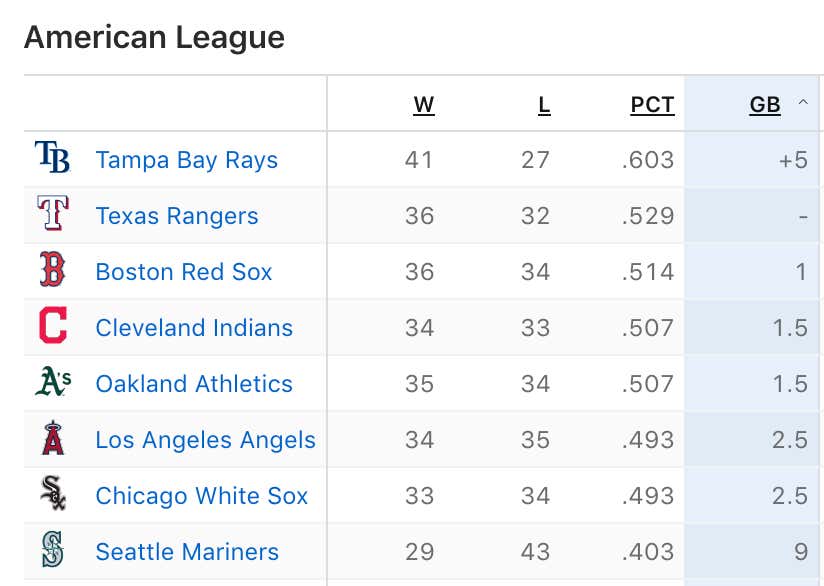 if you would have told me 6 months ago this exact Sox team would be healthily in the playoff mix in June, I would have said you’re crazy.  I said ~70ish wins was their median W/L number, with 75 wins being an “everything goes perfect” year and 65 being an “everything went to absolute shit” year.  But right now this is a team that, wild still flawed, is so goddamn fun to watch.

The team still lacks appropriate depth to still be taken seriously as a Wild Card contender, but every week that goes by they inch closer to being in that discussion.  Fans have taken notice, too:

In fact, the Sox’ ratings on NBC Sports Chicago are up, according to Nielsen Research. Through Tuesday, the team’s season average was a 1.06 household rating (1.0 in the Chicago market equals about 32,514 households). That’s up 41 percent from the Sox’ 2018 average of 0.75.

The Sox’ game June 8 against the Royals made NBCSCH the highest-rated network in the market for the length of the game (1 to 3:45 p.m.). It’s probably no coincidence that Lucas Giolito was on the mound, and he delivered with a stellar outing in a 2-0 victory.

And though their attendance isn’t pre-2010 numbers, The White Sox are one of three teams in baseball to have a better attendance average in 2019, than 2018.  The other two?  The Phillies and Padres.

I feel like I’m in Almost Famous when they say “it’s all happening” every few scenes.  Because it is; everything is going swell right now.  Moncada and Giolito are studs, Cease is on deck, Madrigal and Robert are TEARING UP MiLB, the pen is performing like the great unit I expected it to be, and again, they have a fuck ton of money to spend.  It’s go time starting tonight with Giolito on the bump against one of the best teams in baseball.