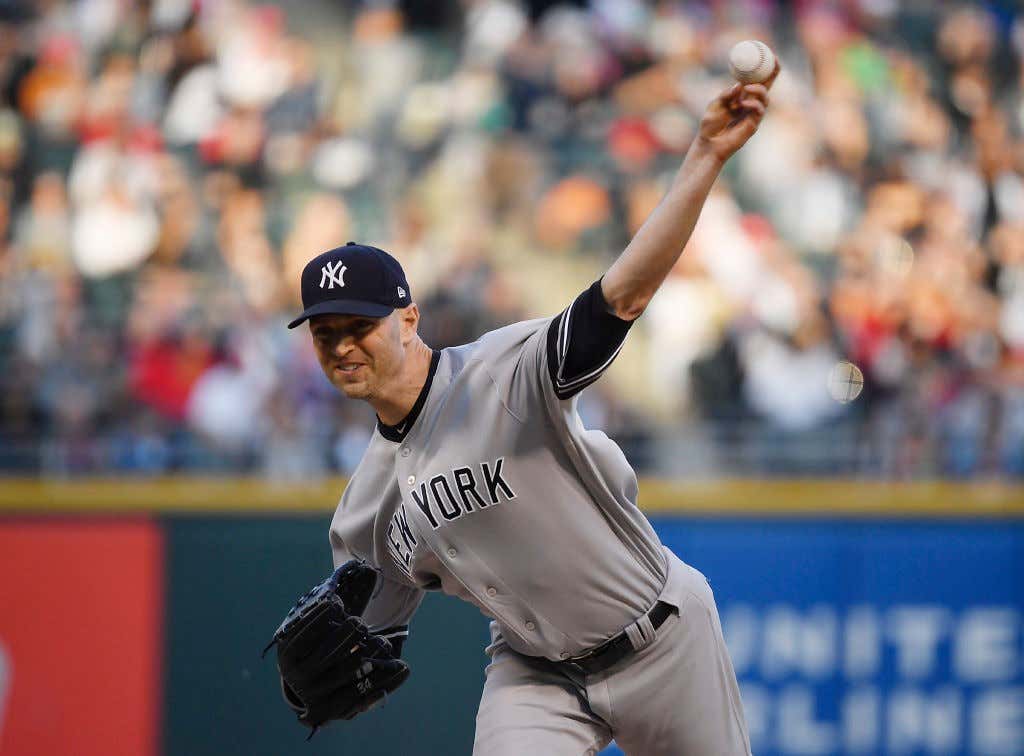 When do you think was the last time the Yankees got a quality start from their starting pitcher? That was actually from JA Happ last Thursday. Before that it was June 2nd with CC against the Red Sox on June 2nd. Before that May 25th against the Royals with Happ again. So since May 25th, the Yankees have produced three (3) quality starts. There have been 18 games in that span. That’s a PROBLEM, and for a few reasons.

One: When your starter isn’t giving you length you have to go to your bullpen. The Yankees have an excellent bullpen, but you know what? When you have to use every guy every day that excellent bullpen gets exhausted and becomes an overused bullpen. When you have an exhausted bullpen before July even rolls around that’s a PROBLEM. And don’t say Dellin Betances is coming eventually because he’s not. In my mind he’s out for the year and anything we get out of him is a miracle. This pen is getting taxed fast.

Two: When you don’t get quality starts out of your pitchers that puts the offense behind early. So many times lately this team trailed by three or four runs in the blink of an eye. The Yankees have a great offense that is about to get even better with the return of Judge and Stanton, but when they can’t win you every game that way, especially in October. Last night was the opposite. The Yanks jumped out in front early 4-0 only to see Happ fuck away that lead in the blink of an eye. The Yanks should have cruised last night, instead they lost. That was an unacceptable loss.

What does the Yankees rotation look like right now? Tanaka, Paxton, Happ, Sabathia and then bullpen games? It’s just not a “best team in baseball” starting rotation. It’s not. It’s probably not good enough to win you the division either.

So what has to change? Well James Paxton needs to start pitching like the guy we saw against the Red Sox a two months ago. Getting beat up by the New York Mets is pathetic. Putting your team in a 3-0 hole 3 batters in is dog shit. Since his return from the I.L. his average fastball velocity has dropped from 95.11, 94.85, and 94.2. He has topped out at 96.6 mph in that span. He says his knee is fine, but it’s probably not. Those drops are concerning as fuck, especially for a guy who has a track record of being injury prone. Fuck.

Tanaka started out the year red hot, with a 2.94 ERA in 11 starts. Over his last three he’s posted a 5.79 to the Padres, Blue Jays, and Mets. Now this isn’t the biggest surprise or concern. In his time as a Yankee, at least over the last few years, Tanaka just doesn’t give a fuck about facing shitty teams. When you need him most, he shows up. His body language has become a thing of late where if a guy makes a bad play in the field he sort of shows them up with a disgusted look. This doesn’t bother me as much as others, but it’s being talked about. Either way, start pitching better please.

JA Happ is an asshole. He looks great for three innings and then he falls apart like he did last night. He’s completely unreliable, especially in a big game. I could not imagine him starting another playoff game for us. His overall numbers have been better of late, but it does not change his narrative.

CC is CC. He’s about to be 39 and will always have that knee problem. He’s going to grind for us, but he’s not a top of the line guy anymore. He’s generally consistent though and will be the closest to giving 5 to 6 innings of 3 run ball every time he goes out there.

Domingo German is awesome, but his innings limit will come into play at some point and we’ll either have to move him to the pen, skip starts, or shut him down entirely. For now he’s on the I.L. with that hip flexor which hopefully explains his shitty starts before going on the mend. Getting him back soon will be nice as long as he can go back to the version where he dominates lineups and gives us depth. Something he ever so desperately need.

So where does that leave us? We need a starting pitcher and FAST. Mike King would be the ideal man for the job but he’s still working back from his arm injury in spring. Jordan Montgomery won’t be heard from until August. Luis Severino will be the perfect shot of adrenaline this team needs, but that won’t come until right after the ASB best case scenario. We can’t just sit around and wait for him to return like he’s the messiah. We have to do something about it first in case that day never comes.

The Yankees need to go get someone, plain and simple. The main targets right now are Madison Bumgarner and Marcus Stroman. I would welcome either man in pinstripes. Bumgarner would be BIZARRE in New York, almost exactly how Randy Johnson was to start off when he fought that camera man. I could picture on an off-day him going hunting with a rifle in Central Park for deer or something. Stroman I think would thrive here. The man loves pressure and the big lights and pitches with emotion. He’s also from Long Island so he knows the area well and wouldn’t be intimidated by NY. I’m a big Stroman guy.

Whoever it is, Cashman is going to have to make a deal and he might not be able to wait until the deadline to do it. He has plenty of pieces to make it work. Pieces that probably won’t have an impact on the future considering who is on the big league roster right now. It’s going to hurt for sure, but it’s something that has to happen. Does it scare me that Brian Cashman has a shitty track record of trading for a SP? Sure does, but we just have to pray he finds us a winner.