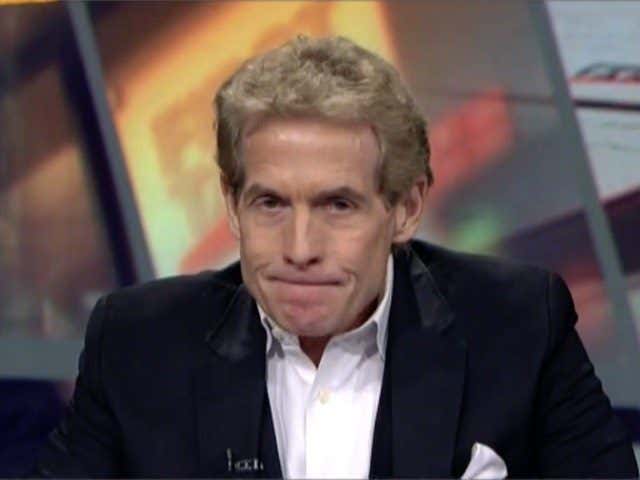 There was so much entertainment in the actual basketball game last night I wouldn’t blame you if you missed the fantastic meltdown of Skip Bayless on Twitter. He’s basically been at this routine all playoffs, where as a grown man he logged onto the internet and acted like Kawhi banged his wife or something. Even if we all know that Skip is a professional troll and is one of the best in the business at it, watching his brain explode as his arch nemesis Kawhi Leonard won his second title and second Finals MVP was something else

Jesus Christ Skip pull yourself together for crying out loud. That was what, 11 tweets about Kawhi Leonard? Be more of a salty little bitch, you can’t. Guess what, after everything we just witnessed with Durant and Klay getting seriously hurt, it sure looks like Kawhi made the right decision by doing what he did in San Antonio last season. Sadly I don’t think Skip is alone in this line of thinking, I imagine there are a lot of salty Spurs fans out there this morning but few are as big a cry baby as Skip Bayless. All playoffs long he did whatever he could to discredit Kawhi’s insane playoff run, one that will most likely go down in NBA history as one of the greatest 24 game stretches ever, and last night was the straw that broke the camels back. That title is what finally may have broken Skip’s brain and it’s good to see he handled it well. By well I mean like a complete child.

Part of me understands this is just a schtick, but the other part of me thinks Skip was being genuine during this temper tantrum. You know Kawhi winning and being so dominant keeps him up at night and that’s just weird. It’s not as if the Spurs are not a trash franchise or anything like that, hell with out open the West is right now who knows maybe they get back to contending rather quickly. There were a lot of awesome storylines that came as a result of the Raptors pulling off this historic upset, but personally being able to see Skip Bayless’ head explode in real time has to be near the top.

If I was Kawhi Leonard I would find the number to his house, call nonstop and do nothing but unleash the Kawhi laugh in his face. Suck it easy Skip, Kawhi officially made you his bitch.