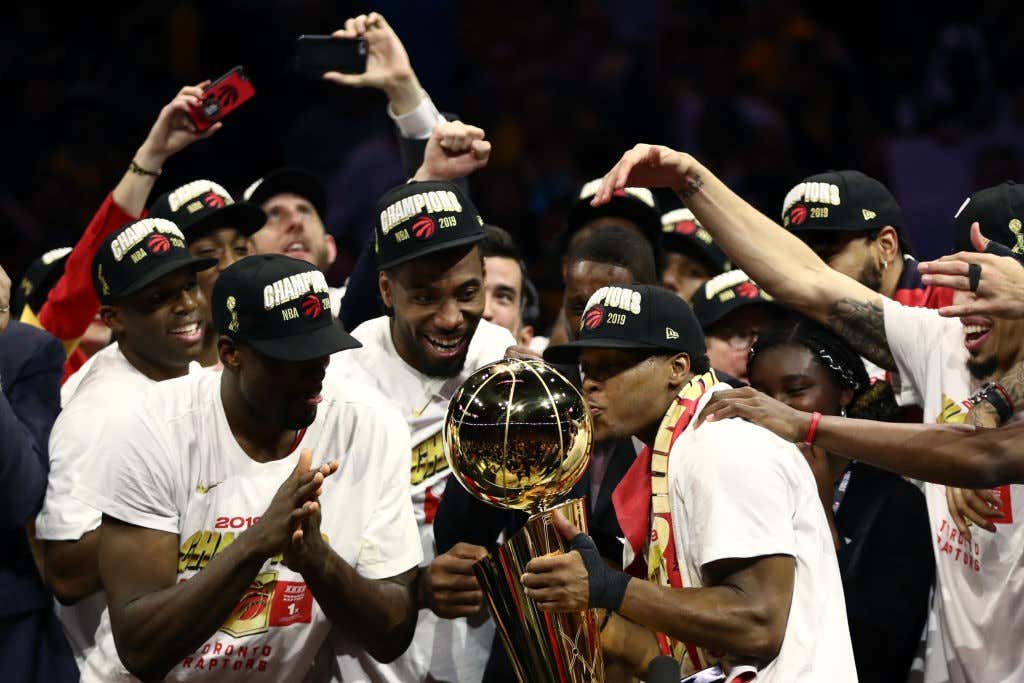 Good morning everybody happy Friday and welcome back to another edition of Last Night In The NBA where we bring you up to speed on everything that went down from the night before in the Association. Sadly, the basketball is now over for at least 22 days until Summer League kicks up in July. We said goodbye to the 2018-19 season last night with the Raptors finally driving the stake through the heart of the Warriors dynasty, it was one of the biggest upsets in NBA Finals history based on their Vegas odds heading into the series, and they won this title in pretty convincing fashion. They proved to be a worthy opponent for the Warriors, something they haven’t really experienced in many of their previous Finals appearances, and we were rewarded with an instant classic in Game 6 for all the marbles. Do you live under a rock and by chance missed the action? Weird way to live, but here’s what happened

First it’s important that we spend a moment and really appreciate the run we just witnessed from GS. Their level of consistent dominance over this 5-6 year stretch was something we most likely won’t ever see again. Not only did they change the way teams are built and how the game is played in the NBA, but they achieved this run from the ground up through the Draft. Sure adding Durant was pretty important to their success, but remember this team was dominant even before that happened. Now, with their future filled with uncertainty, their financials being an absolute mess, and now two devastating injuries to franchise players, who knows what this Warriors team will look like moving forward. It truly may be an end of an era and man it sure was impressive.

In terms of Game 6, it was a nail biter for both sides practically the whole way though. The Warriors got what we all expected in a big time Game 6 Klay performance, which is why it sucked so bad to see him tear his ACL. The man was locked in and put on a clinic

30 points on 8-12 shooting, 4-6 from deep, Klay lived up to his Game 6 reputation and then some and then everything changed in an instant when he landed awkwardly on that play. Somehow we all thought he avoided disaster because everything our eyes were telling us said it, so to then learn much later in the night that he did all that with a torn ACL is some tough ass shit. Who knows what this means for his free agency, but all I know is it sucks.

When it came to his Splash Brother, I would say Steph was…..fine. Maybe that’s the problem

He wasn’t all that efficient at 6-17, he had an opportunity to win the game with a wide open look in the final seconds that he bricked, and is it too hard to say he was outplayed by Fred VanVleet in the fourth quarter with a title on the line? Because he sneaky was. Steph was still AWESOME this entire Finals, but I’m sure he’ll be dragged a little bit this morning for his Game 6. That’s the reality of being as good as Steph, when you don’t always come through in these big moments, you’re going to hear about it.

The crazy thing is the 110 points the Warriors scored were their most of the entire Finals, finally getting over that 109 mark. As a team I wouldn’t say they were lights out with just 48/35% splits and just 11 3PM, but they did get great all around effort from guys like Draymond, Iggy, and Boogie

They did provide enough secondary scoring where in most cases the Warriors come away with the win. Had they gotten just a little more from Steph or better yet Klay not blown his ACL, things most likely end much differently.

But this is about the Raptors. Do not use injuries as a way to diminish what they were able to accomplish, because they were fantastic this entire series and deserved this title. They punched GS in the mouth right from the jump in Game 1 and every single time things got tough for them they responded. Their poise and execution late in games in high pressure situations was incredible and what you have to do in order to take down a dynasty like this. They continued the trend of this Finals where whoever made the most threes won (13) and considering the emotions they probably had after blowing Game 5, to go into Oracle and steal the 3rd game this series all while getting awesome performances from your main guys is truly special stuff

You have to be happy for guys like Gasol and Lowry and all these other players that seemed to always come up short in the playoffs. To finally break through was pretty cool to watch. But here’s something that also broke my brain when I saw it. What if I told you that Kawhi/Siakam had the 2nd most points in NBA HISTORY of any pair in a post season? It’s true. Their 1,187 trails only LeBron/Wade all time. That’s INSANE.

To win this title the Raptors had to lock in once things got to the fourth and they responded. They won the quarter 28-22, mostly behind Fred VanVleet heroics, but it was also the lowest scoring quarter of the night for GS. For that to happen at home doesn’t make much sense but that’s just how dominant TOR was. It didn’t matter where these two teams played, they had the Warriors number this whole series. If not for that 18-0 run earlier in the series this thing was a sweep. You combine their elite level defense with the fact they were great in terms of taking care of the ball and answering every GS run with either a dagger three, they were basically the Warriors. Once upon a time it was GS that beat people with defense and threes, and this year they got a taste of their own medicine.

Now what happens from here is anybody’s guess. Does this title allow Kawhi to leave with no hard feelings? Does it convince him to stay and continue to build in a city where he is now a God? Does Ujiri take this massive offer from the Wizards to run their basketball department? Who knows. All we know is this is the Raptors moment in the sun and I say let them and their fans enjoy it. They had a badass Finals and are now your 2018-19 NBA Champions.

That feels weird to say, but this was a very weird NBA season so it’s basically the perfect way for it to end.