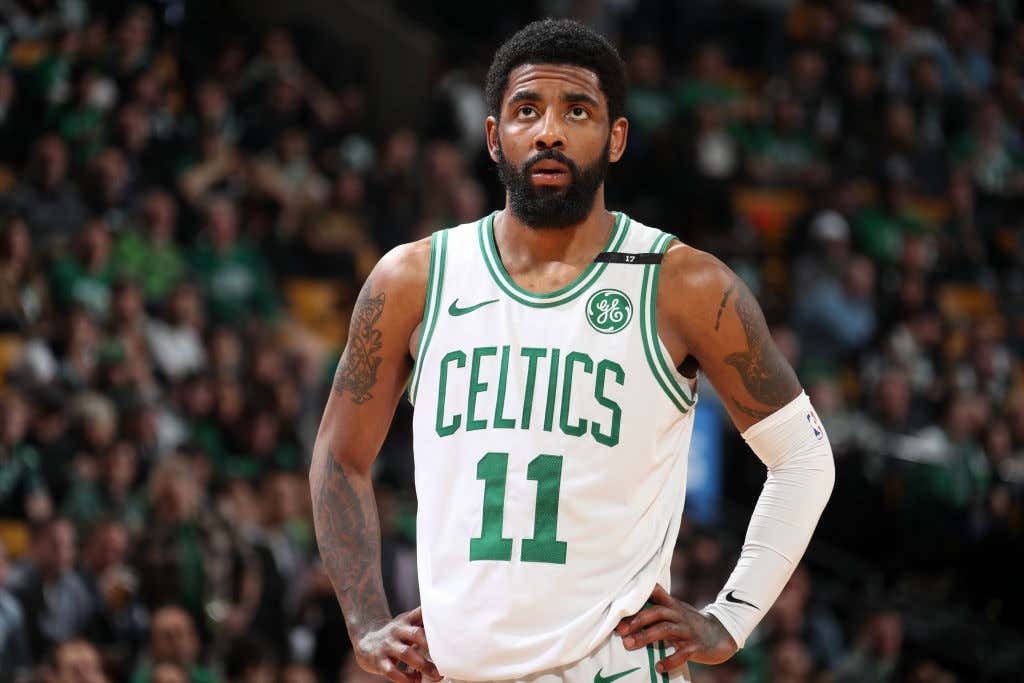 (Boston Herald) – According to a source with ties to Roc Nation, the organization expected to become Irving’s new representative, the All-Star point guard is prepared to sign with the Brooklyn Nets when he becomes a free agent next month. A separate league source told the Herald that his team (not the Celtics) has received the same information and is operating under the belief that Irving wants to join the Nets.

Word is that the Celtics, meanwhile, had not been given any definitive indication from Irving as of Thursday afternoon.

To be fair to the situation, any story involving Irving needs to contain a disclaimer. While the two sources cited in the second paragraph are to be trusted, most anything involving Irving should be seen as a fluid matter. Nothing can be truly settled until a contract is signed, and that cannot take place until the NBA moratorium ends on July 6 at noon Eastern Time. And, as Celtic followers have come to know, Irving remains eminently capable of changing his mind.

It therefore was clear that Ainge was choosing his words carefully when he spoke with the media on June 5, not wanting to say anything that might damage any chance the Celts might have at keeping Irving.

Let me explain to those who may not be too familiar with Boston media where this report comes from. In a world of talking heads and hot take artists who go on TV and say all sorts of shit to go viral, that is not the case with Steve Bulpett who wrote this piece. Whenever Celtics news comes out, you have to wait for him to drop his article on the Herald because he is Ainge’s guy. He gets the stuff and usually the truth from the Celtics. Not Woj, not Shams, Bulpett is the dude. So, when he says that Roc Nation and another league source confirm that Kyrie is going to the Nets, you can pretty much consider it a fact.

Now obviously this isn’t all that surprising. The Nets rumors weren’t all that new even once the Celtics were initially eliminated, then came the trade to open up $46M in cap space, followed by the news last night of the agent switch and then the IG picture liked by D’Angelo Russell. I said this morning it felt more real than some of the other rumors we’ve heard just because of the timing of it all. If you were a Celtics fan that was holding out hope that maybe an AD trade would change his mind or that this was all just internet drama, well I’m sorry because it’s pretty clear that Kyrie is giving Ainge a good ol kick to the dick and heading out of town.

I said it at the time when this trade first happened and I got killed for it, but there were two things that terrified me when it all happened two years ago and why I wasn’t over the moon about the trade. Part of that was being an Isaiah guy sure, but the other part was a combination of Kyrie’s health, which proved to be an issue, and then the uncertainty around his future. That now also proves to be an issue. I feel like Celtics fans will never fully agree on who won or lost that trade but to me that’s not really the point. Ainge made that deal in an effort to bring in a cornerstone player to lead his franchise for the next decade and compete for championships. He got 2 years, one terrible playoff run, and now is left with nothing. Even if you want to say the Celtics still won the trade, the reality of how it all worked out certainly isn’t something any Celtics fan hoped for. You understand why he took the risk because you need stars to win, but it didn’t work out, plain and simple.

I’m sure there are also some who are happy to see Kyrie leave given how this past season went. I can understand that and for me when you combine the announcement in October that he was down to stay, and then this commercial

to then see him leave after a disappointing postseason run is what makes him seem like such an asshole. He has every right to choose where he wants to play, but just keep your mouth shut all year about it, it’s not that hard! That’s the biggest issue Kyrie had this year in my opinion, he couldn’t get out of his own way.

For a guy who talked all year about being a leader, this isn’t exactly the actions of one. He could have accepted that he sort of sucked this playoffs and was a huge distraction at times and vowed to correct it by committing and righting the ship in Boston. This was a team that bent over backwards for him, gave him everything he wanted and surrounded him with good young talent. Everything he said he wanted he had in Boston, so to now turn his back on that and leave the Celtics high and dry is fucked up. He played in a system that helped him achieve the best statistical season of his career and that still wasn’t enough for him. He failed and ran, which in my opinion is the definition of being a coward not a leader.

Of course we’ll have to wait for this to truly be official, but like I said Steve Bulpett doesn’t lie. The Kyrie Era appears to be over for the Boston Celtics, and I’m having a hard time seeing it as anything other than a complete and utter failure. The goal wasn’t one high regular season seed one year and then a second round exit the next. The goal was Finals appearances and Kyrie being the cornerstone point guard of the future. Neither happened. Now is there a small sliver of hope that maybe he changes his mind and that changes everything? Sure, but I wouldn’t hold my breath.