THE NATIONAL OBSERVER – The video shows a bar packed wall-to-wall with fans watching an NBA Finals game between the Toronto Raptors and the Golden State Warriors as if their lives depend on it.

A few seconds in, the bar erupts into cheers after Golden State player and basketball legend Kevin Durant sinks to the ground, clutching his leg. The entire crowd begins screaming, jumping, cheering and tossing their beverages into the air in what looks like an extremely unsportsmanlike display of joy at a player’s injury.

It didn’t happen. Some Raptors fans did cheer the injury, but this particular video, posted online Tuesday morning by the American sports and culture blog Barstool Sports, is an edited version of one from 2016.

Here I was, sipping my cup of late-afternoon coffee and catching up on the National Observer’s “Election Integrity Reporting Project,” and right after I finished the deep dive reports on carbon taxes, online extremism, and Zuckerberg’s subpoena, I came to #13: an absolute slander job on Barstool Sports.

Unlike some of the well-edited fake videos circulating online in 2019, this one is quite sloppy — it shows daylight streaming in through the windows (the game happened at night) no one in the frame is wearing Raptors gear and the edges of the video onscreen waver strangely, among other issues. [Editor’s Note: absolute ricochet shot]

Nearly 90 per cent of Canadians have fallen for fake news online, according to a poll released this week by Ipsos Public Affairs for the Centre for International Governance Innovation (CIGI), a Canadian think tank.

Yeah, 90% of Canadians (lol) have fallen for “fake news” like this article…the other 10% know what’s really going on at The Toronto Tavern (Triple T).

They even used this highly edited footage uploaded to YouTube and backdated by “Heart” as if that’s some sort of “proof”:

And I STILL haven’t seen one scientific report debunking the light-enhancing windows. 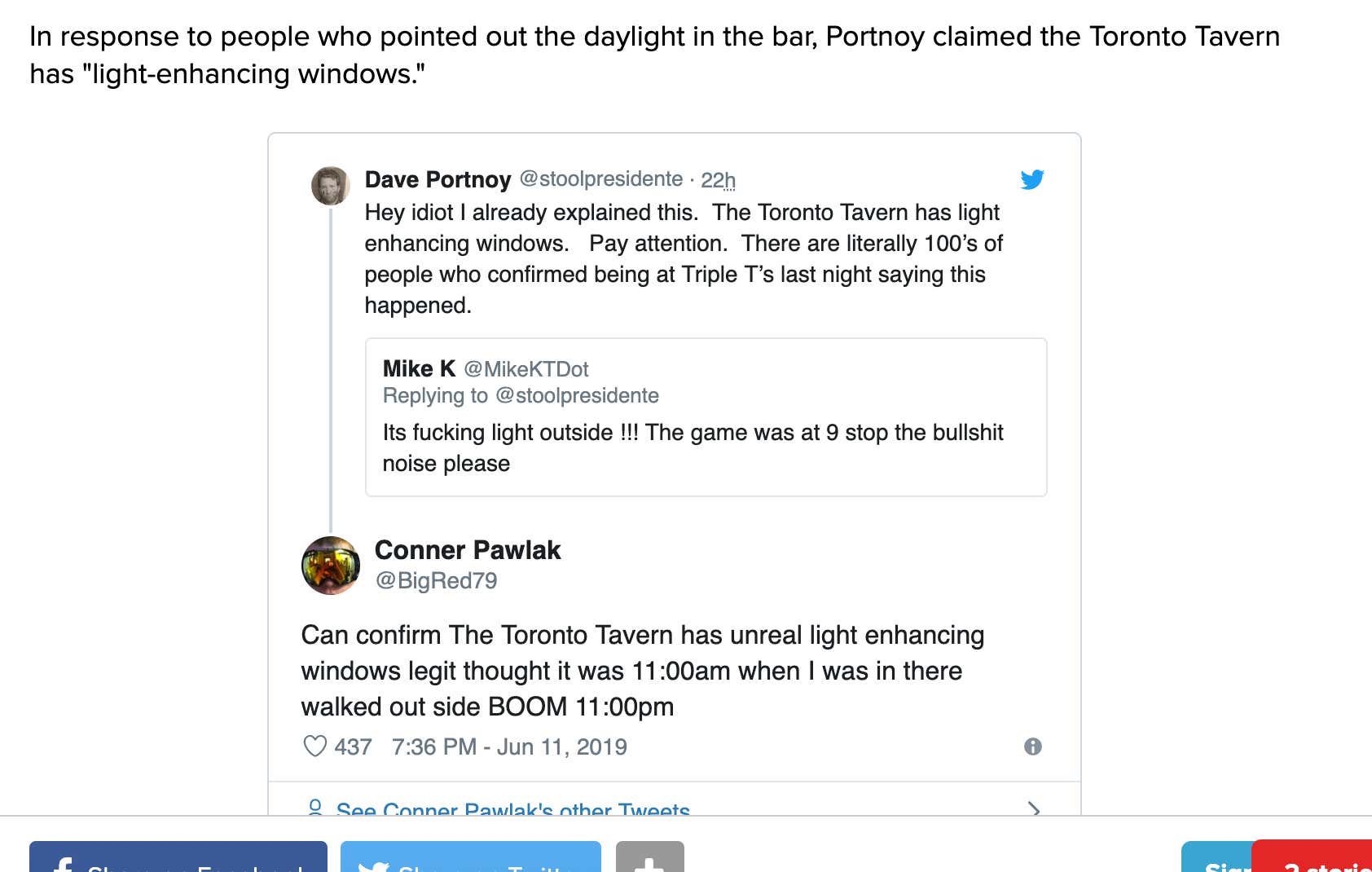 Imagine spending 4 years in college majoring in Journalism…going to grad school for another degree in Journalism…landing a job at a major media outlet known for “groundbreaking reporting on issues shaping our future”…hunching over your desk covered in newspaper clippings, notebooks full of sources and worn hardcover copies of All The President’s Men…cracking your fingers…and spending your day researching and reporting on the Barstool Sports Toronto Tavern Kevin Durant meme?

(via The National Observer, YOUR #1 place for groundbreaking reporting on issues shaping our future and Kevin Durant memes)