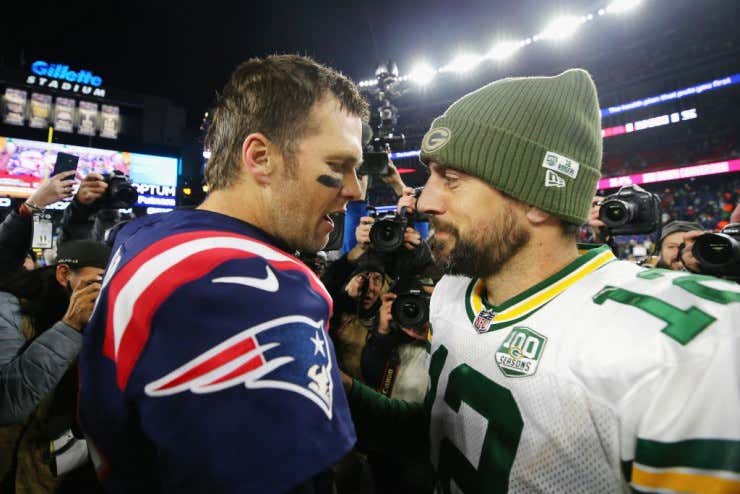 If there’s one thing I’ve learned in my adult years (a very big supposition for sure), it’s that there is nothing you can say that is so obvious that nobody will argue the point with you.

I mean, it’s 2019 and Kyrie Irving, a grown man in an age where literally all human knowledge is available on a device in his pocket, thinks if he travels too far from Boston, he’ll fall off the edge of the Earth onto a giant cosmic turtle’s back. (You’re welcome to try and I hope you’re right, freakshow.) There are people who still think we didn’t land on the moon, even though it’s simple Newtonian physics and the biggest challenge was refrigerating the liquid fuel. And a scary number who don’t believe dinosaurs existed and those giant bones being dug up all the time are a just an elaborate hoax perpetrated by the money men at Big Paleontology.

But of all the things I thought were not debatable, the Tom Brady vs. Aaron Rodgers seemed to me to be the most Settled Science. Not up for discussion. A matter of fact, not opinion. Agreed to by the advanced metrics guys and old time scouts alike.  The scientists and philosophers. The mystics and statistics. But it turns out I was just being naive:

Really. A majority of almost 21,000 of our fellow Americans think Rodgers is a better quarterback than Brady. Am I living in the Dark Ages? Or Bizarro World? Has everyone gone insane?

You know how in Debate Team in school they make you take a position and argue it, regardless of whether you believe in it? I never tried that but always thought I’d be good at it. But there’s no way I could defend the “Rodgers is Better” argument. Not in 2019. And probably not in 2010 when he was winning his only Super Bowl or 2011 and ’14 when he was winning his MVPs.

I mean, what case would I make? Whipping out their Pass Ratings to compare size because Rodgers’ is slightly bigger? Talk about their running, like that’s anything more than a slightly useful skill for a QB, like a pitcher who can hit? (Otherwise we’d be talking about putting Ron Mexico in the Hall of Fame, which nobody is.) Do I go to everyone’s default setting, which is blaming Mike McCarthy for Rodgers’ 9-7 postseason record and say how “lucky” Brady is to be the right “system”?

I could argue pure numbers, because it’s all the Rodgersphiles have. But there’s not that big a difference. 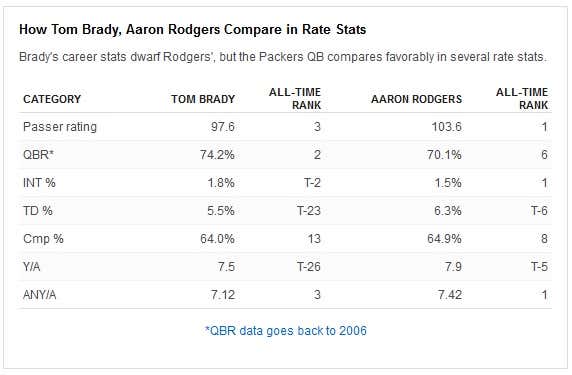 I could dive into the intangibles. The evaluations that are a little harder to quantify, like Late & Clutch. But Rodgers fans don’t want to charge up that hill. Nor should any QB want to be compared to Brady in late game situations. This was from the last time they faced each other, last November:

So yeah, there are still millions of Americans who want to ignore the evidence, convince themselves their lunatic theories are correct and believe their own fallacious arguments. Unfortunately for them, this argument is decided by polls. It’s scientific fact.