Hey, Grant, You can find me in a Rough n Rowdy ring whenever you want. I’m not afraid to fight (googles his name) a 59 year old. Not one bit. Not after this. Blasting DeMarcus Cousins as a person and a player? Not on my watch.

First off, this is just you holding a grudge for whatever reason. That’s pretty clear with the clear lies that he was ‘run out of Sacramento and New Orleans.’ Uh, the Kings were the worst run franchise in ALL of sports when he was there. And New Orleans? The dude ruptured his Achilles and the Pelicans didn’t want to pay. That’s not being run out.

I mean look at all these terrible things DeMarcus Cousins does off the court:

Now as for Cousins’ answer about people cheering Durant being hurt? He was ASKED this question. He didn’t go out of his way to address it. What do you want him to do? Lie. Give a canned, boring answer? This is a dude who suffered the same injury a year ago. Of course he’s going to have an opinion.

‘Act like a freaking professional.’ Apparently that’s what Grant wants as he goes off on this tirade. I’d say Cousins did do just that. He was asked a question, answered honestly. That’s what a professional does. Just like how Grant can blast him because that’s his job. Athletes don’t have to shy away from old media dudes.

Mind you if you talk to his teammates at Kentucky or in the NBA they love him. So there’s two trains of thought here. Those who saw the early Kings Cousins and his yelling at refs and think he’s some dogshit guy because of that. And those who actually know he’s fine. Speaking of teammates lets look at some quotes from this Slam article

Indiana’s Paul George used the word “misunderstood,” and echoed the sentiments of Hayward and Millsap. “Nobody really knows DeMarcus outside of basketball. He’s one of the best guys to be around, to be honest. I think what people don’t understand is just how bad he loves the game and how bad he loves to win. I think he gets judged off that, and I feel bad for him, because it comes from a good place, it comes from his heart. He plays with his heart, and I don’t think he should get criticized for it.”

Likewise, Clippers center DeAndre Jordan called Cousins a “great teammate,” not the cancer that so many “sources” have pegged him to be. “He’s super funny, he’s a prankster, he’s always laughing and smiling and joking. And that’s fun to be around.”

Starting to look like a group consensus, no? But let’s check in, lastly, with the superstars who know Boogie best. His real friends in the League. Guys like Isaiah Thomas, Anthony Davis, DeMar DeRozan and John Wall.

Thomas, who played his first three NBA seasons in Sacramento, told reporters that Cousins is “the total opposite of what people think of him.”

Davis called Cousins “one of my closest friends in the League” on Friday of All-Star Weekend. “People got their own opinions and their own perceptions of him,” AD said, “but I know the guy he is and what I see off the floor, just being around him and knowing him for so long—I don’t get that perception at all.”

DeRozan, whose friendship with Cousins dates back to playing in Nike camps together and against each other on the summer AAU circuit as teenagers, said, “People who don’t know him get their own perception of him, which is 85 percent of the time wrong. He’s always been a great dude from every aspect that I’ve known him.”

Damn, guys who know him speaking well of him? Some major names in the sport? Must be a terrible guy. This doesn’t even date back to Kentucky teammates who say the same thing about him.

He’s going to speak his mind – the same as other athletes – and doesn’t care if a guy like Grant goes off on him.

But as for now? I’ll be waiting, Grant. 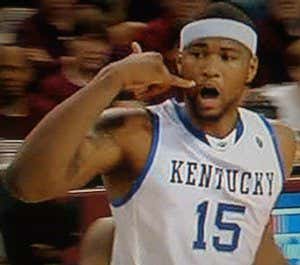