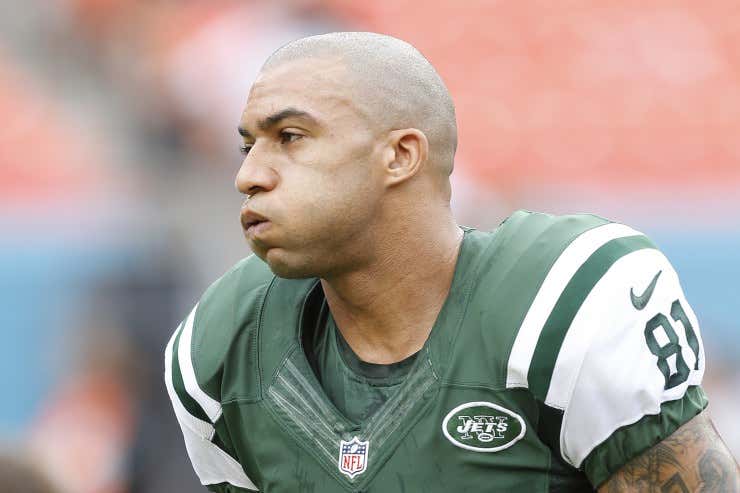 Source – Winslow faces a maximum sentence of 8 years in prison for the rape charge and an additional 6 months for the indecent exposure and and lewd conduct convictions.

The jurors did not reach a verdict on eight other counts. …  Just after 4:30 p.m., the judge summoned the jury back to the courtroom and instructed them to go home for the night and return Tuesday morning at 9 a.m. for a final attempt to break the deadlock on the remaining charges. …

The 35-year-old son of former San Diego Chargers legend Kellen Winslow still faces rape and kidnapping charges involving a 54-year-old hitchhiker last March in Encinitas, and a 17-year-old girl who was allegedly raped in 2003 at a Scripps Ranch house party.

I feel like this is one of the most under-followed, under-talked about stories in as long as I can remember. And I include myself in that because I’m not sure I’ve blogged about this yet. Which is inexcusable. Because Kellen Winslow II (I don’t know when or why he changed it from “Jr” but I’m going with it) might, all things considered, now own the record for the greatest fall from grace of any athlete ever.

Remember when we used to think that record belonged to Tiger Woods because he was the most famous athlete on the planet and got caught by his wife texting dirty to his sidebeef at the Thanksgiving dinner table? Thanks in part to he and said wife having very different ideas about how much sex should be in a marriage? That seems pretty tame when you look at it through the prism of a guy who should be contemplating retirement at the end of a Hall of Fame career getting convicted of raping a 58-year-old homeless woman, flashing his dick at another 58-year-old minding her own business in her yard and then creeping on another woman in a health club hot tub.

Of course you can add OJ Simpson, one of the best who’s ever played his position, college or pro, who unequivocally cut the throat of is wife and her friend almost to the spine. But no matter how wrong it was, he beat the rap. And even after going to jail for stealing back his own bobblehead dolls, he and his gigantic, post-prison Easter Island head are still revered in some very twisted circles.

Aaron Hernandez and Rae Carruth? Absolutely. But neither of those guys anywhere near approached Winslow II: The Sequel’s level of ability, fame and potential.

We are talking about a kid who was To the Manor Born. The son of a Hall of Famer who reinvented the very position his kid was playing. Winslow 2: Winslow United was already generating national attention as a blue chip recruit coming out of high school. He won the Mackey Award at the U. of Miami. Had 122 receiving yards in the National Championship game. Made headlines when he called himself  “a fucking soldier,” which outraged people who were in no mood to hear a scholarship athlete compare himself to soldiers when the news was filled with flag-draped coffins every day. He was a household name years before the Browns took him with the 6th overall pick in 2004.

In short, if 15 years ago you power ranked all NFL players in terms of how likely they were to someday get convicted of raping a 58 year old homeless lady, there would be no reason to put Winslow Deux anywhere near the top. Even as he was pulling dumbass moves like eating the pavement while riding his Suzuki GSX-R750. And yet here he is. And, just as significantly, he’s not done yet as the jury has had a few questions involving some legal definitions, but by no means does that indicate he’s out of the woods regarding the rape of the 54-year-old or the teenage girl.

And it’s just incredible to think someone who was given so much in terms of advantages in life, financial security, the benefits of being a beloved celebrity’s kid and all that natural ability could turn out to be such a monster. But it’s just another abject lesson in how much is doesn’t matter if you’re rich, famous and talented AF, you can still earn yourself a place in Hell, getting raped by Satan for all eternity. Good riddance.