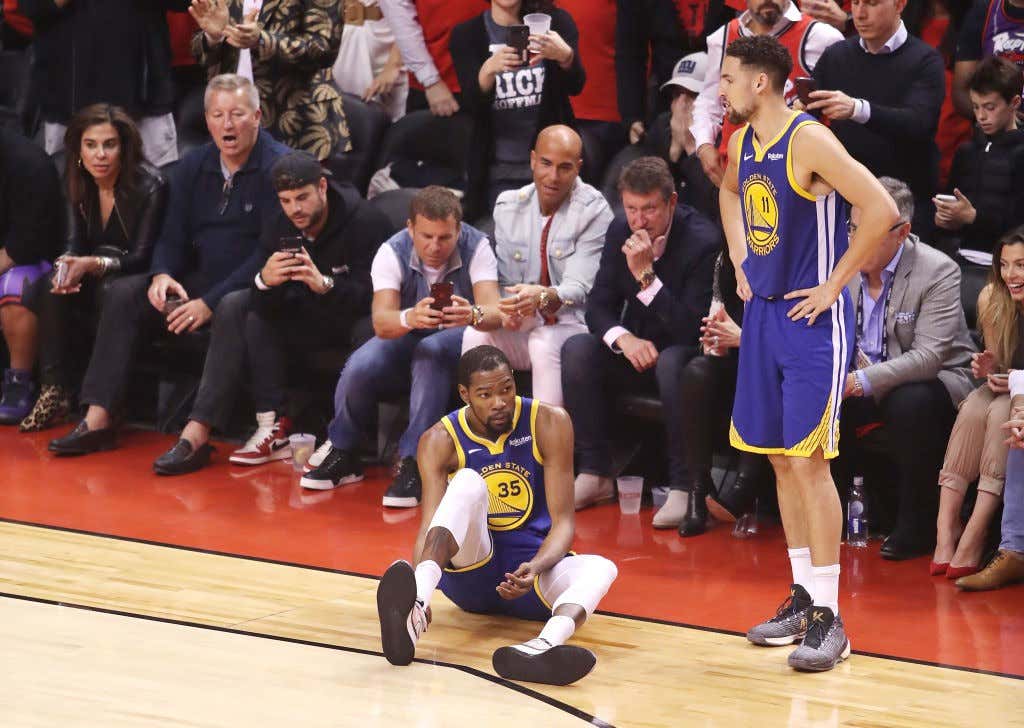 Good morning everybody happy Tuesday and welcome back to another edition of Last Night In The NBA where we bring you up to speed on everything that went down from the night before in the Association. Last night there’s no debate we witnessed something that could impact the future of the NBA for years to come. No, I’m not talking about the fall of a dynasty, the Warriors are still alive, I’m talking obviously about the injury to one of the game’s best players and its impact on this great league we all love. It sucks that lost in all the drama around Durant’s achilles injury is the fact that the actual basketball game was one of the most entertaining and drama filled Finals games in recent memory. Fortunately we’re about to talk about both so if you missed all the action here’s what happened.

There’s no debate that when this game first started and we all saw Durant look healthy that it clearly made a difference for GS. The way he started, knocking down his first three triples, he was playing with confidence in terms of stepping into his shot without hesitation, he was everywhere on defense, and Durant showed to be every bit the problem we all expected him to be once we heard he was going to play in Game 5. But then in a blink of an eye it was all over

I don’t buy the bullshit that the team pressured him to play, this is the same organization that wouldn’t take the risk with Klay Thompson in Game 3. He was cleared, I think he wanted to play, and he got some shit luck. That happens. All reports postgame are pointing to a ruptured achilles even though Durant will have the MRI today, but it’s safe to say we won’t be seeing him for a quite a while. No matter if you’re a Warriors fan, Knicks fan, whatever, as basketball fans the league is worse with Durant not in it, especially when he’s playing the best basketball of his life. This now opens up the door for a million different scenarios this summer. Does Durant opt into his last year in GS and miss the year? Is there a team out there willing to just offer him max money anyway and then not have him for 2 years and be on the hook for $38M for a 34ish year old Durant? How does this impact other big time free agents? Are they more likely to stay in their current spot not that they can’t team up with Durant? It’s not crazy to think this one injury helped dictate what the NBA will look like for the foreseeable future.

But back to the season saving Game 5 performance. With Durant out and the Warriors in need of a lift, they turned to their Splash Brothers who were more than ready to carry the load

I think we can bury the whole “Steph doesn’t show up in the Finals” bullshit right? He’s averaging over 32 a game these Finals and has been everything this team has needed through this point. I’m not sure what more he could do, so it’ll be up to “the others” to continue to pull their weight, and if that happens well we may very well have a long series on our hands. Draymond had another near triple double and a seasons saving block on Kyle Lowry’s final shot from the corner

and on the whole this was a very Warriors like performance. Finishing with 46/47% split and 20 3PM, it’s not exactly rocket science that whichever team wins the 3P battle has won their game so far this series. A huge advantage behind the arc is why the Warriors are still playing, but if they don’t clean up their defense and turnovers this won’t end well for them.

Good news is Boogie looked much much better

What we saw from the Warriors last night was that championship level composure you would expect from a team in their position with their history. They were not afraid of the moment when they were down 6 with like 2:30 left, instead they did what the Warriors do, They hit back breaking threes right in your eyeball. Steph and Klay showed just how big their nuts are and hit nothing but net, which has to start to give TOR fans doubt. Even without Durant this team is no joke, and things are only going to be tougher in Game 6.

For TOR, everyone knows the closeout game is the hardest, and the Raptors were a breath away from their first ever title. That’s rough, but it’s certainly not over. They are still up 3-2 with Game 7 at home so now is not the time to be suicidal or anything like that. Their play over the last 5 minutes sure looked like a team that was going to break through, and they did it with the same old formula of balance offensively, good defense, and then when it came to winning time to give it to Kawhi

You could tell they were maybe a little nervous in the first quarter where they gave up 34 point, but man did they lock in during the second half. You hold GHS to just 44 points over the final 24 minutes that’s pretty impressive, and then any time you go punch for punch with them down the stretch that is nothing to be ashamed of. You could even argue they benefitted from a friendly whistle whether it was the FTA (27-14) or that one play where Boogie had a clean putback that they called basket interference.

At the end of the day though, their lack of outside shooting (8-32) is ultimately what did them in. Well that and Nick Nurse’s timeout with around 3 minutes left while TOR was on a 12-2 run. He said he called it because they were going to lose them anyway and he figured his team could use the energy boost. Well all it did was boost GS, who went 3-3 from the floor after that timeout and ultimately stole the game. I’m sure he regrets that decision this morning, but what can ya do, his line of thinking isn’t all that crazy considering Kawhi was on fumes.

Now we turn the page to Game 6 which unfortunately doesn’t happen for another 500 days. There’s a strong possibility that the Raptors just blew their chance at the title, but something tells me we aren’t close to being done, these teams are too even. So while injuries suck and you never want to see shit like that happen, it did grant us more basketball, which I think everyone can get behind. You are now all caught up with everything that happened, have a great Tuesday!