Weird game top to bottom. No other way to put it so let’s recap and move on.

Every time we go to Colorado we’re constantly reminded that Javy Baez Hit His First Home Run There Did You Know That? So let’s get that out of the way. It was a big fly 5 years ago.

Again – no clue why that’s constantly shoved down our throats when the Cubs play in Colorado but here we are.

I’ve decided he’s my favorite player to play against because at least once a game you go NO FUCKING WAY. The flip wasn’t even that amazing either. It was just the timing and more notably, the fact that no one saw it coming. Not you. Not me. Not CarGo. And while on topic, we’re not paying CarGo to slide. That’s a Dave Kingman quote btw. Educate yourself one time.

The Cubs jumped out to a 4-0 lead early on the backs of Back-To-Back-To-(WALK)-To-Back home runs that I can’t source on the internet because MLB fucking sucks at this stuff. So here’s the one from Bote. Schwarber and Rizzo followed with a KB walk inbetween the two.

Darvish immediately gave it back. Probably just the altitude.

The game stumbled into a lull from there until Ian Desmond came off the bench to hit the literal farthest home run of the entire season. Poor Monty

That ball was shit on immensely which is what happens when you throw breaking balls over the inner part of the plate in Denver. That’s just the way it goes.

The Cubs fought back to tie it at 5-5 before immediately giving it back again and losing 6-5. I’ve already forgotten about this game and I’m still writing the blog about it.

That’s a nice moment for a guy everyone seems to like. There’s a lot of time left for me to think he’s a bum, but for now CarGo is really fitting in nicely. My only concern is it eats into Almora’s time too much. But again and for now, I like what we’re getting from the veteran outfielder. For nothing else, he looks so goddamn cool in a Cubs uniform 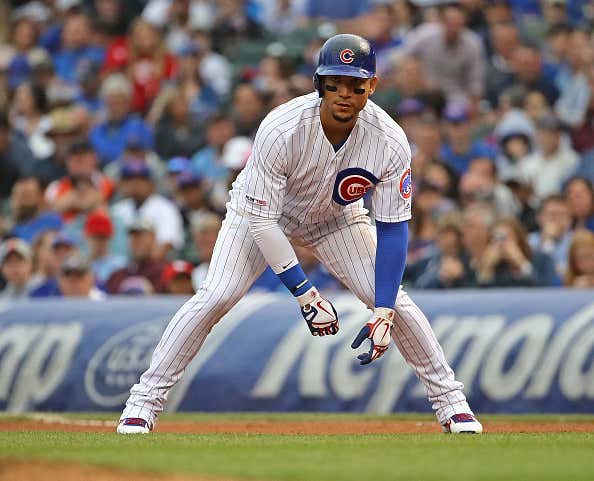 The Spanish Cubs love flare and CarGo is no exception. I want everyone wearing arm sleeves and eye black tomorrow no fucking questions asked.

2 more in Colorado and 4 in Los Angeles before their next off day.

On the bright side, extra innings and eating through the bullpen would be worst case scenario. Take the loss and move on. You don’t win them all.