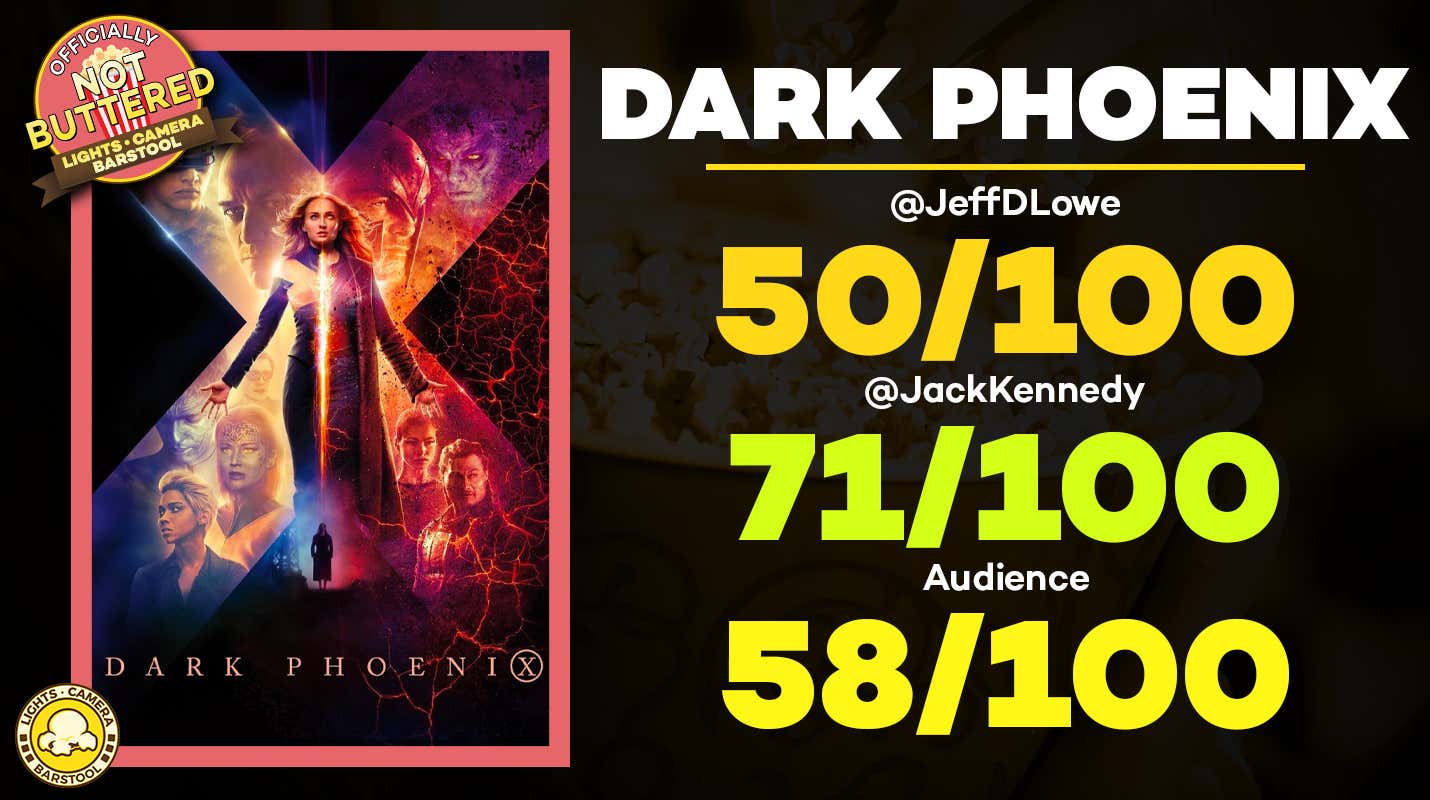 Well, they finally released ‘X-Men: Dark Phoenix’ and we reviewed it…

Jeff (50/100): While ‘X-Men: Dark Phoenix’ might not be as bad as ‘X-Men: The Last Stand’ or ‘X-Men Origins: Wolverine’, the movie fumbles an iconic storyline and ends the series with a major whimper. For a saga based on superheroes with special powers to be reduced to a final movie of mostly monologues and arguments is just unfortunate.

One of the most glaring issues with the movie is the clear lack of interest from the actors to take part in ‘Dark Phoenix’. The movie is stacked with good actors and a duo in James McAvoy and Michael Fassbender that has been great together for the last 10 years. But this time around, and even more than in ‘X-Men: Apocalypse’, the cast was supplied with an incredibly weak, clunky script. There’s simply nothing to the dialogue and it lacks every bit of heart possible. This is supposed to be a dark and emotional end and you really get neither of those elements.

The components that should make up a good movie for this storyline are really flat. Jean Grey is supposed to feel like the most dangerous threat in the universe as the Phoenix, but I never really got that vibe at any point. She kills someone (some people? It was hard to tell, honestly), knocks people over and gets angry, but there was nothing that made me go, “they should all be truly horrified of her.” Jessica Chastain’s character (an alien whose name is sort of spoken one time) is the puppet master and the real threat in the movie. Without the main draw and plot of the movie landing, what is the point of it all?

There isn’t much to write home about regarding the other mutants in ‘Dark Phoenix’ either. What saves the movie from being a complete zero is the presence of two decently entertaining fight scenes, but other than that, we see a ton more standing around and talking than we do power using. And don’t even get me started on the usage of Quicksilver. There is no new version of the iconic slow-motion scene and the character is removed from the movie all together at the halfway point. Also, spoiling a major character death in the trailer is… an interesting decision. It’s just a really disappointing movie from start to finish.

Like I said, ‘X-Men: Dark Phoenix’ is not the worst of the X-Men movies, but it’s still pretty bad. The only major enjoyment I had was walking out knowing that Kevin Feige and Marvel Studios finally have control of the property and can soon introduce it into the MCU.

PS -The movie had a nice score, which shouldn’t come as a surprise since it came from Hans Zimmer

KenJac (71/100): After being pleasantly surprised by both ‘X-Men: First Class’ and ‘X-Men: Days of Future Past’ and then getting very disappointed by ‘X-Men: Apocalypse’, this movie falls somewhere between them all. It has a very boring villain and predictable plot, but some badass fight scenes and great visual effects. I wish this franchise had a better sendoff with Fox as Disney starts to pick up the pieces, but I’m sort of satisfied with it regardless.

The returning cast is fine, but I never really liked Tye Sheridan as Cyclops. That might just be because I find all the movie Cyclops’s to be sort of lame, though. Sophie Turner obviously has the biggest emotional burden in the movie, and I thought her performance was fine but also a bit forced at some of the emotional points. The biggest miss was the casting of Jessica Chastain. She’s one of my favorite actresses in the game right now but she really had no place in this role which gave her no room to work with.

There are definitely problems with the plot. It’s predictable and hinges on shitty, one-dimensional villains in a comic book movie era that demands more from an antagonist. I understand wanting to stay sort of loyal to the comics or whatever, but if you land a premier actress like Chastain to play your bad guy you have to switch things up to fit her skills. The strength in this movie comes from the action scenes which were refreshingly R-rated, more like ‘Logan’ than the previous films. There is one fight scene on a train at the climax which was an extremely suspenseful and thrilling ride. The visuals and audio looked great, especially when Jean Grey is sort of coming into her powers.

If you’re into the X-men or just want a holdover for your comic book movie fix, it’s definitely worth seeing in theaters. I saw it in Dolby and the theater experience was fucking awesome during the scenes in space and during fights. It’s certainly imperfect, but nowhere near as bad as some of the professional critics are saying. Overall, I feel comfortable comparing this to another recent movie that I gave a similar rating to and that’s, ‘Godzilla: King of the Monsters’. Great fights and visuals, but a poor plot and bad scripting.

—
‘X-Men: Dark Phoenix’ is Officially Not Buttered even without Trillballins’ score. Tune in to the new Lights, Camera, Barstool where we rank the Top 5 Road Trip Snacks.