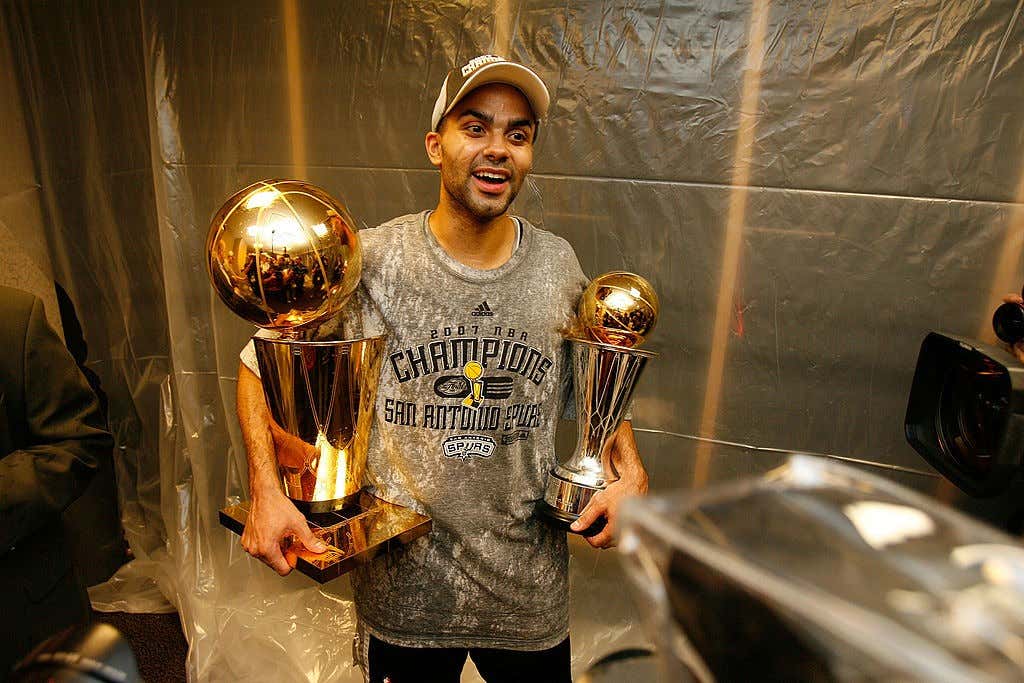 Man does this make me feel old. After 18 seasons and a Hall Of Fame career Tony Parker is hanging up his shoes for good. Now I think we’ll get a situation where the Spurs sign him for like one day so he can officially retire a Spur and not a Charlotte Hornet, or at least they should. It always felt weird seeing Tony Parker in that CHA jersey and I always felt that once the Spurs lost all their point guards to open the season that the Hornets should have found a way to get Parker back to his old stomping grounds.

Now that it’s all said and done here’s how Parker’s career ended:

Not bad for the 28th pick in the 2001 Draft if you ask me. The career is a little personal for yours truly not because I’m a Spurs fan, but the fact that this dude was very very close to becoming a Celtic

“The Boston coaching staff, they thought this was the premier point guard in the draft,” Pitino said. “They loved him. If Forte was not available, they probably would have gone with Tony Parker. This is someone who is very, very highly valued in the league and can really shoot it and play the point position.”

“[The Celtics] made my eyes water on draft night,” Parker recalled during Grantland’s BS Report podcast at All-Star weekend in 2013. “I’m going to tell you a true story. True story. True story. The draft, you have that NBA lady, Chrysa — she comes to me, and it was the 19th pick, she gives me a Celtics cap and says, ‘They are going to pick you.’ And it was like three minutes left on the clock, and you have five minutes to pick. Then at one minute she comes back and takes the cap, [and says,] ‘Oh no, they changed their mind.’ They took my cap. I was like, ‘What?’

“And so then they drafted Joe Forte. I was always curious what happened. One day I asked the GM, Chris Wallace, I was like, ‘What happened in the draft, like when you changed your mind?’ Because the day before, I had practiced for Boston. So I did two workouts — I did the normal workout, then the day before the draft they did a workout. It was Jim O’Brien at the time, the coach, and he was like, ‘We want to draft you, but the Spurs are going to try to make a trade at 20, but if you’re available at 21, for sure we’ll take you.’ The coach and the GM, they wanted me, but the president, big boss, he changed his mind.

Fucking Joe Forte, what a disaster.

Anyway, things worked out pretty well for Parker and honestly he’s lucky to have avoided those horrific early 2000 Celtics teams because ending up in SA to partner with Duncan and Popovich and eventually Manu clearly worked out. Who can forget the work he did against LeBron and the Miami Heat during that 2013-14 title run

and I think it’s safe to say the Tony Parker Floater was one of the more unstoppable shots in the league. You could even call it revolutionary

Also the man got to bang Eva Longoria in her prime so really he was winning in all facets of life when you really think about it. What I’m not excited for is his jersey retirement ceremony in SA. They do these better than pretty much any other organization and both the Duncan and Manu tributes were must watch stuff. I have no doubt that Tony Parker’s is going to be just as good.

It’s always a little weird to see guys who you watched basically your entire adolescence start to retire, and there’s no doubt that Tony Parker was one of the most successful guards of his era.