From the Tokyo Reporter:

A 41-year-old man suspected in the theft of women’s underwear was found to be in possession of nearly 400 pairs, police said Monday, reports Ryukyu Broadcasting (May 27).

Last month, the suspect, a former garbage collector, allegedly attempted to steal a pair of women’s underwear from the first-floor balcony of a residence in Tomigusuku City.

The female resident tipped off police after seeing the suspect reach for the garment. Officers arriving at the scene arrested him when he tried to board a taxi.

…396 pairs of underwear… A stolen pair for every day of the year, plus an extra bonus month. What do you do with them all?

Making things even stranger, it seems he’s been at this for so long his own family tried to seek help for it:

“Because I wanted underwear, I stole [the pair],” the suspect was quoted by police regarding the case in January. However, he did “not remember” how he obtained other 395 garments.

Police displayed the garments on a blue sheet for the press on Monday.

About 10 years ago, the family of the man consulted with police about his habit of “what appears to be the theft of underwear.”

According to the always reliable Urban Dictionary, this person displays the classic signs of ‘snowdropping':

..And it might not be as uncommon as you’d think.

When I was in the Marines we had shared laundry rooms at our barracks & a common complaint among the ladies was that underwear would go missing. The same for when we’d drop off our laundry overseas – you’d get it back & everything would be neatly folded, except for the underwear which were simply no longer there. I used to think it was younger guys playing weird pranks, but after this guy’s story.. perhaps it was one single Lance Corporal who has now amassed a ball of women’s underwear the size of Rhode Island.

*Worth noting, my large, worn-in, pastel-colored Hanes were usually spared. It’s a mystery.

In closing, gotta say that I like how they laid all the pairs out like the Coast Guard does with bricks of cocaine & weapons they find. Would have enjoyed seeing the local PD, guns blazing, squatting proudly in front of this sea of britches. 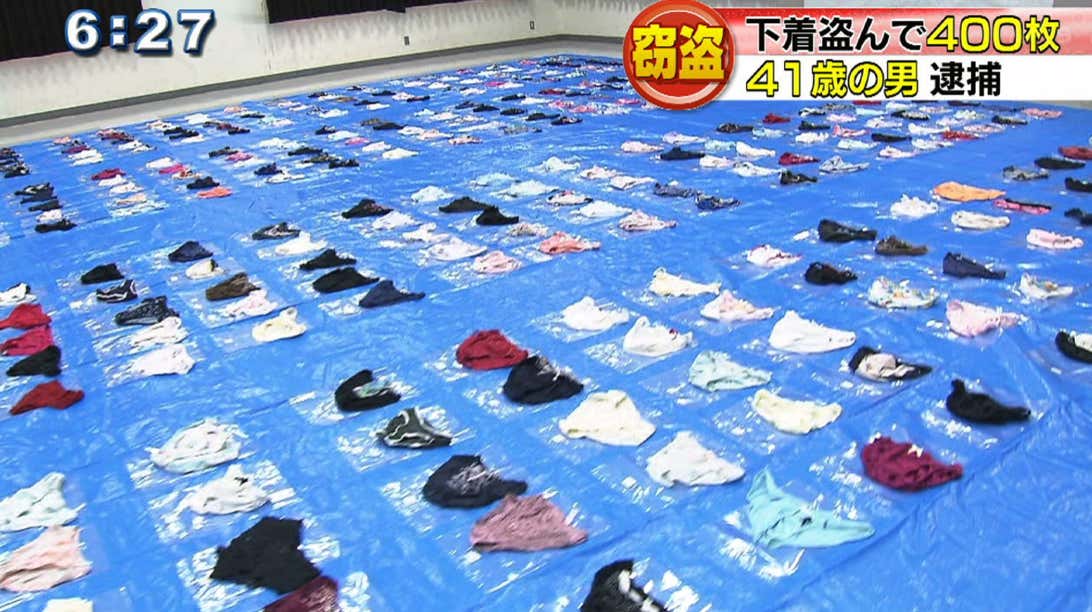