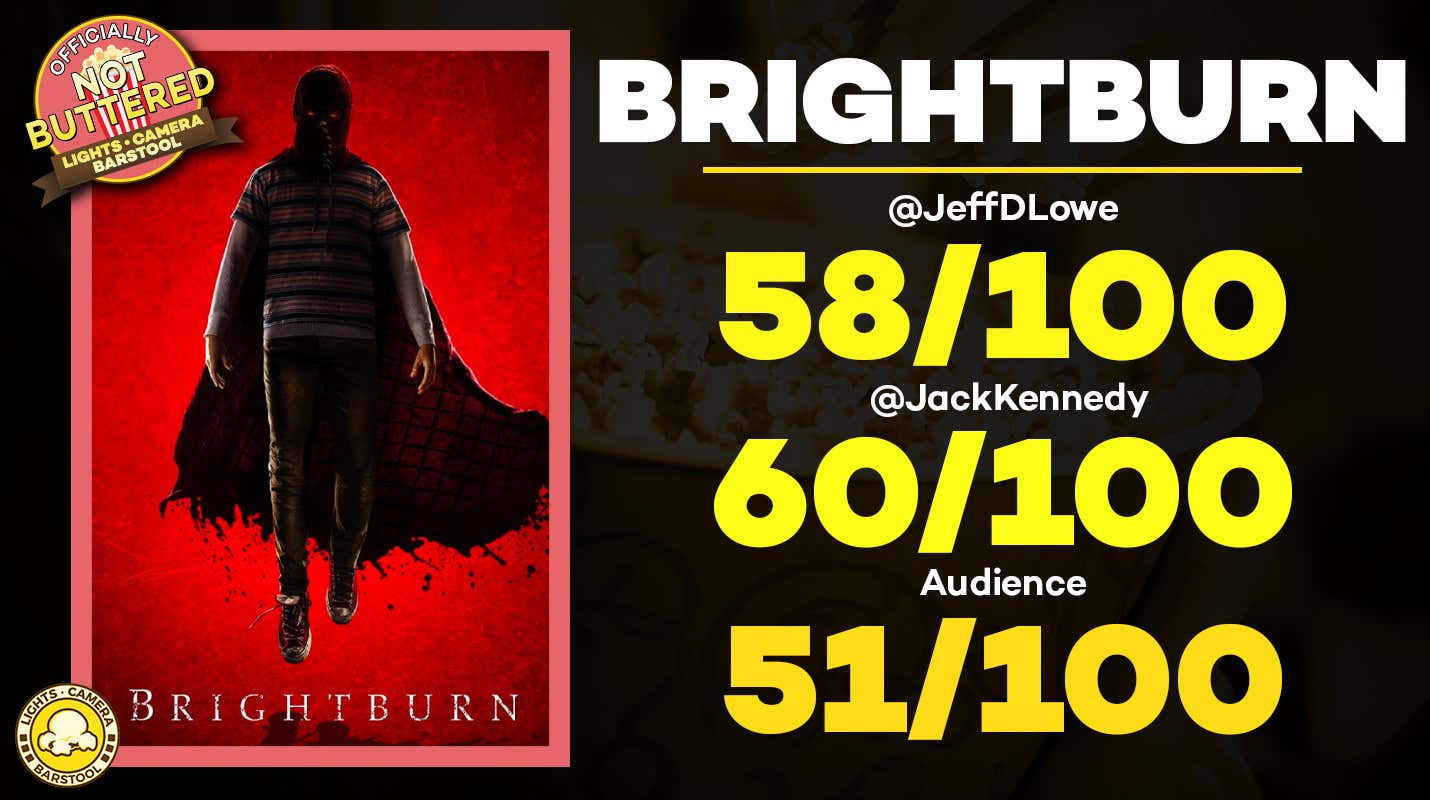 Jeff (58/100): ‘Brightburn’ is an ambitious and fresh idea for a comic book movie, but ultimately trips up on its bland and predictable story. A dark version of Superman, the newest movie from producer James Gunn, ‘Brightburn’ is intriguing off the bat but begins to fizzle amidst the gore as it fails to offer up enough excitement.

Even as someone who loves comic book movies, I can admit that different takes on the genre are needed as more and more are released into theaters. We’ve seen plenty of gory villains (Jason Vorhees, Freddy, etc.) and our fair share of anti-heroes (Venom, Suicide Squad, etc.), but a dark version of a popular hero is something fairly unique. It is a competent movie for a while too, as performances from Elizabeth Banks and David Denman help elevate a pretty ordinary script. The development of Brandon (the main character and Superman-like being) builds up to a point where you expect some shock and awe, but it all ultimately becomes a gore fest. There are a lot of cliche elements in the movie, but they actually fall more in line with a slasher than they do with other comic book entries. I would be lying if I said I was a big gore guy, but I really didn’t care for how big of an element it was in the movie. ‘Brightburn’ needed more humanizing, smart moments to separate it from the styles of these movies we’ve seen before.

In the end, ‘Brightburn’ doesn’t deliver anything quite memorable. When I think back on the movie, I will mostly think about the concept and the failed execution. It’s great to see different takes on the comic book genre, but next time I hope for something with a little more meat on the bone.

KenJac (60/100): David Yarovesky’s big first movie hits some interesting notes, but fails to put together a totally cohesive melody. It’s scary but not scary enough, it explores some interesting coming-of-age aspects but not smoothly enough and it has good performances but none that are strong enough to carry the film. The big three performances come from Jackson A. Dunn, who is wickedly scary, Elizabeth Banks and David Denman. Dunn did a great job of being a creep, while also giving a good angsty teen portrayal. Elizabeth Banks was great as a mother struggling to come to a realization about what her son really is. David Denman is Roy from ‘The Office’.

My issue with the movie is that it’s not really scary or suspenseful enough to hold enough to captivate the audience. I enjoyed the mystery surrounding the character of Brandon and the world building quite a bit for what that’s worth, but it needed slightly stronger storytelling to make it a complete picture. I also enjoyed the ending, because the possibility of this turning into a bigger universe of villians is really intriguing in a cinematic world over-full of good guys.

—
‘Brightburn’ is Officially Not Buttered even without Trillballins’ score. Tune in to this Thursday’s Lights, Camera, Barstool for our full review of ‘Rocketman’ and ‘Godzilla: King of the Monsters’.