Don’t get me wrong, this guy is an asshole. But, major props to him. Sitting outside by yourself 21 hours before tip only to watch it … outside. No thank you. I mean this isn’t even a home game. It’s not like you get the same thing. You’re sitting outside to stand outside to watch the game on a big screen.

Call me crazy but I don’t get the appeal of this. For a home game I can at least understand that you want to be around the arena. But, again. This game is in CALIFORNIA. Just go to a bar, man. Just have people over your house. Anything but sitting outside for 21 hours before the game.

I will say this. For some reason this picture is cracking me up 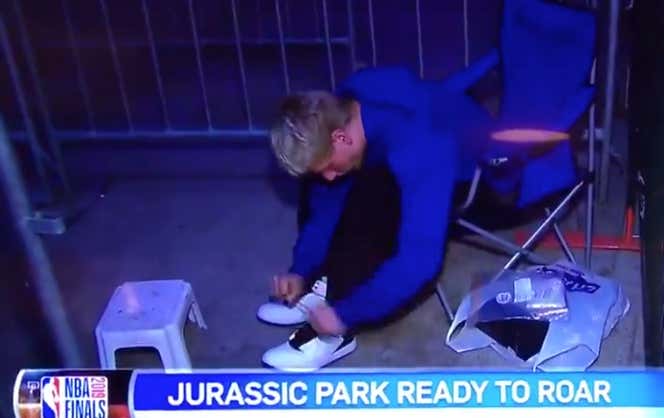 He’s got his little baggie of stuff. Lacing up his sneakers, never know when a game could break out. Part of me is wondering if this is just this guy trying to get some peace and quiet away from his family. I mean that’s really the only reason to get to Jurassic Park 21 hours early. Wife driving him a bit insane. Kids crying. Let me just go outside, game 3 is about to start.

How pissed would he be if someone steals his spot once everyone is crammed in there just standing watching the game?