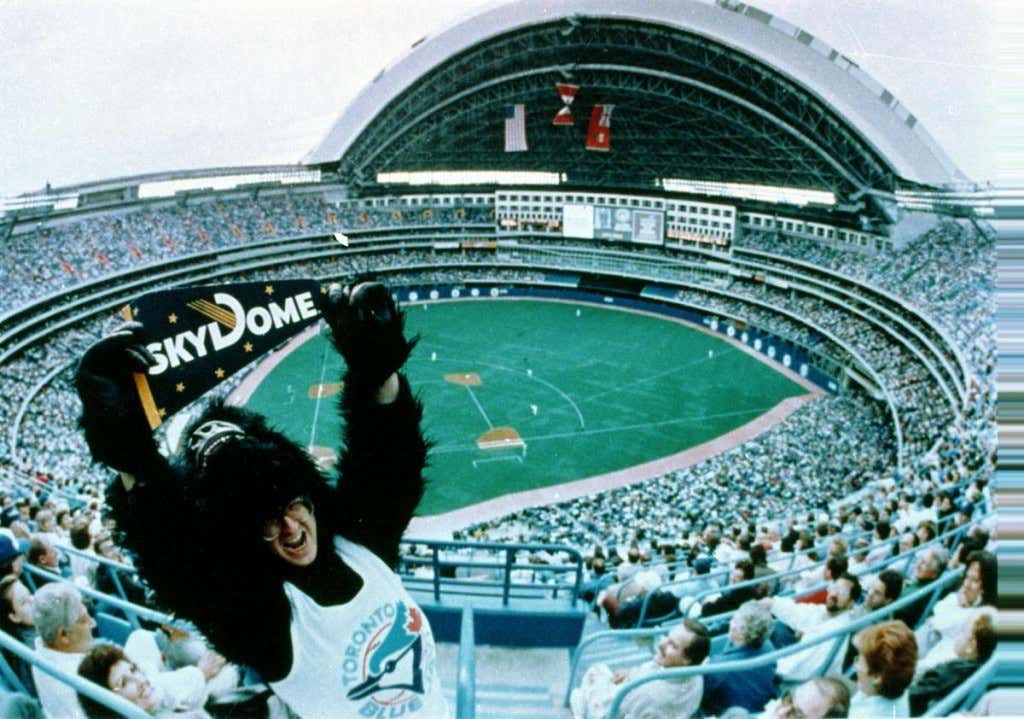 The Toronto Blue Jays play the first game at SkyDome. The first domed stadium with a fully retractable roof in North America. The roof built on rails opened and closed in 20 minutes giving a view of the CN Tower. The SkyDome also had a built-in hotel overlooking the field with a Hard Rock Café. The Blue Jays would lose their dome opener 5-3 to the Milwaukee Brewers.

When the Toronto Blue Jays joined the American League in 1977, the called Exhibition Stadium home. The stadium built in 1959, was the fourth incarnation of the field built for the Canadian National Exhibition in Toronto. It was primarily home for the Toronto Argonauts of the CFL. The stadium had many problems for watching baseball as the stands were exposed to the elements and had many seats that did not face the field. Often winds off Lake Ontario made the stands feel like an icebox, as seagulls flying off the lake sometimes interfered with the game.

Plans for a domed stadium began to take shape following the 1982 Grey Cup, which was played in a heavy downpour, as waterlogged fans chanted we want a dome. After the Blue Jays won their first division title in 1985, plans began to take shape as financing was secured and design was put together. The stadium would be built over an old railyard and the base of the CN Tower, the largest freestanding structure in Canada.

Ground was broken for the SkyDome on the final weekend of the 1986 season. It would take nearly three years to complete the project, which eclipsed the initial budget of $150 million and ended up costing $570 million to build, with most of the money coming from public financing. Initially, the SkyDome was expected to be ready for the start of the 1989 season. However, during construction, several old artifacts were unearth causing delays in construction. To celebrate the domes opening a special ceremony was held on June 3rd. The roof was open for the ceremony and the rains came, dampening the fireworks display durring the chesiest party ever made.

When the 1989 season began the Blue Jays, who had been contenders in the American League East over the last several seasons, looked anything but as they floundering in last place at 12-24 when Manager Jimy Williams was fired on Mother’s Day. The Blue Jays began to play better as May came to an end under his replacement Clarence “Cito” Gaston, who had been the team’s hitting coach since 1982. On May 28th, the Blue Jays closed out Exhibition Stadium in dramatic fashion as they beat the Chicago White Sox 7-5 in ten innings on a walk-off home run by George Bell.

By the time it came to play the first game at the SkyDome, the Blue Jays were in sixth place with a record of 23-31. The Milwaukee Brewers meanwhile were in fifth place with a record of 24-30 under Tom Trebelhorn. Jimmy Key made the start for Toronto, while Don August took the mound for the Brewers. Paul Molitor led the game off with a double and later scored on a grounder by Gary Sheffield to give the Brewers an early 1-0 lead. In the second inning, Fred McGriff hit the first home run at the new stadium, giving the Jays a 2-1 lead with George Bell on base after a leadoff walk. Milwaukee got a run back in the third inning as Mike Fielder scored on a sacrifice fly by Robin Yount. In the fourth inning, the Brewers again grabbed the lead as Glenn Braggs homered with Rob Deer on base. In the fifth, they extended the lead to 5-1 when Sheffield singled home, Molitor. The Blue Jays would get a home run from Bell in the eighth but could draw no closer, losing 5-3. Despite his struggles Key, went the distance earning a loss to fall to 6-4. August improved to 4-5 with a win, as Dan Pleasac recorded his 13th save of the season.

While they lost their first game in their new domed stadium, the Blue Jays quickly learned to like playing at SkyDome as they began to turn their season around. A 20-win August had sprung them up to the top of the Eastern Division, as they finished the season at 89-73 before losing to the eventual World Champion Oakland Athletics in five games. The Blue Jays would win the American League East in four of their first five seasons at SkyDome, culminating with back-to-back World Championships in 1992 and 1993.

Here is a full look at the Opening Celebration for SkyDome. With it is a challenge. How long can you watch it before it becomes so cringe-inducing you can’t stand it anymore.