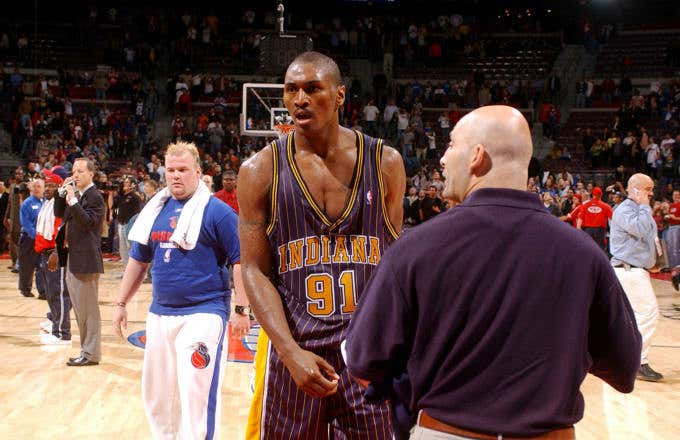 Seeing as how this may be a lazy hungover Sunday for a few of you out there and we have all day to kill until Game 2 tips off at 8pm, I wanted to give you the perfect way to kill a few hours. If you haven’t already, I highly recommend watching the Ron Artest Documentary that came out this weekend on Showtime

I remember when this trailer first came out a few weeks ago and I couldn’t wait to see it. Ron Artest is such an interesting guy and these Showtime docs have been so good lately I knew it was going to be awesome and boy was I not disappointed. As a Celtics fan I have a long history with Artest, from the early battles he and Paul Pierce used to have when he was on the Pacers, to him being one of the main reasons the Big 3 doesn’t have 2 rings it’s fair to say he was a thorn in my fanhood’s side for basically my entire adolescence . Watching this documentary you get a really good look into what made Artest the person he is and listening to him throughout the whole thing I couldn’t help but actually sort of like him. He’s a no bullshit kind of guy and that comes through in spades. His story is truly interesting and you don’t even have to be a Bulls/Pacers/Kings/Rockets/Knicks/Lakers fan to enjoy it.

It was definitely pretty interesting to hear him go through the Malice at The Palace ordeal and everything that went on with that, but also learning how the beef that he and Jermaine O’Neal had was pretty serious. You forget Artest was a borderline MVP candidate while Jermaine O’Neal was the franchise player and honestly I don’t remember them hating each other like you learn about in this film.

Trust me, if you’re a basketball fan you will love this documentary.

On that note, once you wrap this one up if you haven’t yet spend your lazy Sunday and run through some of the other great documentaries that have come out recently. We have been blessed with some really awesome basketball docs over the last few months where each one seems better than the one before it. There was Boogie’s not too long ago

Listen you know you don’t want to do anything today, maybe your head is spinning a little bit so do yourself a favor and pack a bowl and fire these bad boys up and it’ll be tip off before you know it.