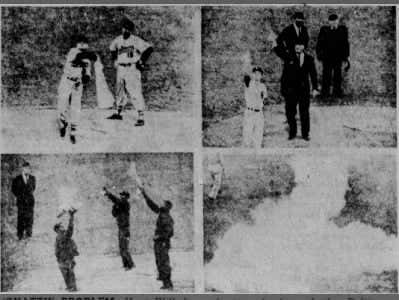 A Tuesday Night Game at Comiskey Park, between the Chicago White Sox and Baltimore Orioles, turns into a 1950’s horror film as the field becomes overloaded with gnats. Play becomes impossible as the gnats swarm around the players especially in the infield. This led Owner Bill Veeck to call for the postgame fireworks to be set off leading to a 30-minute delay as the Orioles win 3-2.

The 1959 season marked the triumphant return of Bill Veeck, who had previously owned the Cleveland Indians and St. Louis Browns creating many creative promotions along the way and raising the ire of other owners in baseball. Veeck’s father had once run the rival Chicago Cubs and had been the behind the idea of installing the ivy at Wrigley Field.

The White Sox had played well over the first two months under Manager Al Lopez, holding a record of 25-20 entering a June 2nd game against the Baltimore Orioles. The Orioles had once been Veeck’s Browns, were also playing well at 25-21 under Paul Richards.

It was a warm muggy night on the Southside of Chicago as 12,482 fans were on hand. White Sox starter Bob Shaw pitched around trouble without allowing a run in the first. However, Baltimore starter Hoyt Wilhelm who had shutout the New York Yankees in his previous two starts was clearly perturbed by the gnats as the White Sox scratched a run on the board with Nellie Fox scoring on a Larry Doby grounder. This led to a 16-minute bug delay as umpires, grounds crew and bat boys ran around the field with bug bombs. The White Sox added a second run in the fourth as Bubba Phillips doubled home, Billy Goodman after Chico Carrasquel made his second error of the game at shortstop.

The bug attack continued and with bug bombs not doing enough to clear the infestation, Bill Veeck asks that the postgame fireworks be set off. This created a new problem as the drifting smoke made visibility impossible, leading to a 30-minute delay or the smoke clear. Once the game resumed Hoyt Wilhelm got to the knuckleball to dance and did not allow another run, going nine with one earned run on seven hits and eight strikeouts. The Orioles would tie the game in the sixth inning on a two-run home run by Billy Klaus after Whitey Lockman led off with a triple. In the ninth inning, the Orioles got three straight one-out hits to chase Shaw from the game, as Gus Triados knocked in Willie Tasby with what would be the winning run.