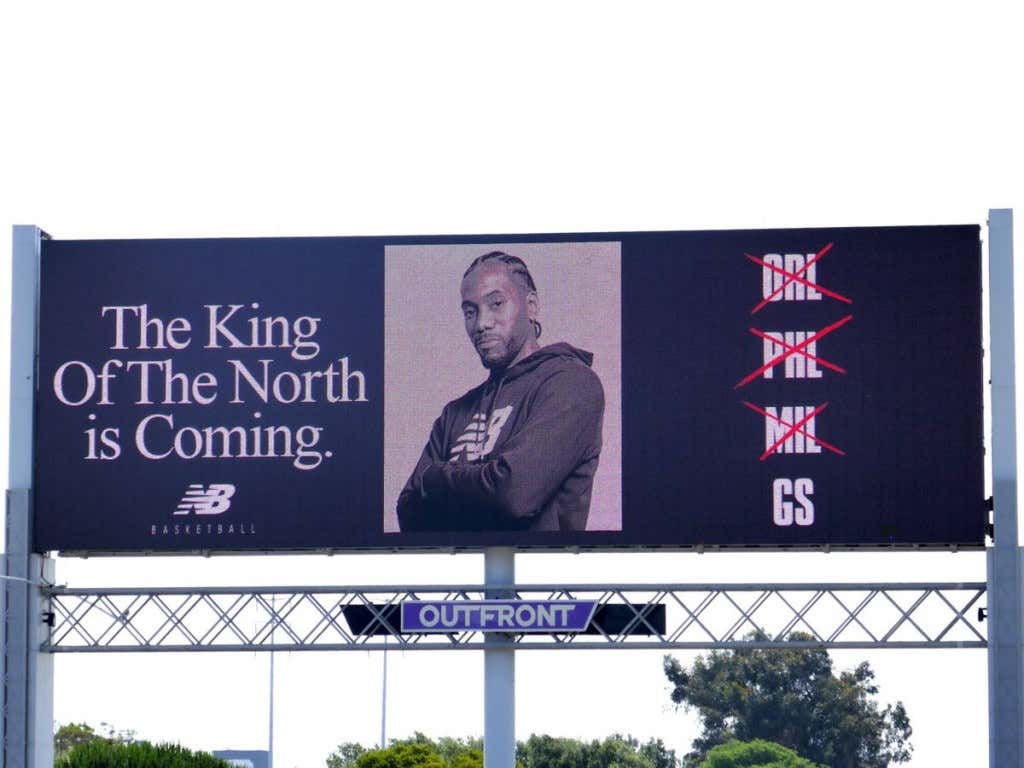 Name two hotter things on the planet nowadays than Game of Thrones and Kawhi Leonard. You can’t. I have to say I absolutely love this move from New Balance and I love it even more after what we saw last night. You can’t tell me there aren’t some Warriors fans in Oakland that were driving to work and saw this billboard and immediately had a chill go down their spine. Kawhi had an off night in Game 1 and they still won, he’s destroyed everything in his path so far this playoffs and he’s coming to your backyard soon enough. There’s nothing you can do to stop it, all you can do is pray.

I know the Warriors have no way of preventing something like this from happening, they can’t stop someone from purchasing billboard space if it’s available but this just goes to show you what a beatdown they are experiencing so far in terms of mental warfare so far this Finals. You can understand shit going down in Toronto with fans doing their thing and then Drake obviously getting into everyone’s head, but having something like this on your home turf is tough. Everything associated with the Raptors has been a step ahead and you have to admit they have absolutely nailed their first ever Finals appearance so far.

Unfortunately for the Warriors, I don’t think Kawhi is going to be defeated as easily as the Night King. You can’t just stab him with threes or something and watch him turn to dust because he’s a different type of monster. He’s more Terminator than ice monster or whatever. I’d argue that Game 1 was the Warriors Arya Stark moment where they actually got the best of Kawhi and it still didn’t matter. That’s most likely not happening again, they had their shot when he went 5-14. If he finds his groove in Game 2 and heads to Oakland feeling good, I’d be terrified.

Of course it’s early in the series and we all have to wait to see how the Warriors respond, but make no mistake the Raptors are completely owning every aspect of this Finals and it’s not even close.