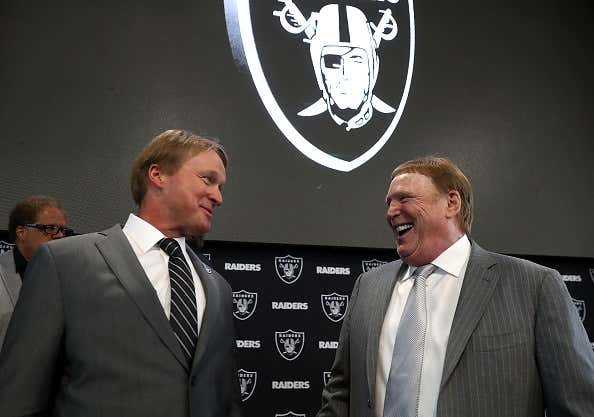 So what do you do when you’ve put together a roster that not only includes the unstable element Antonio Brown, the mercurial compound Vontaze Burfict – who famously hate each other after numerous AFC North run ins – plus unknown particle Gareon Conley who was charged with rape but passed a lie detector test before the 2017 draft? Well if you’re Jon Gruden and Mike Mayock, you stir in the highly volatile explosive Richie Incognito, shake vigorously and see what happens, apparently.

In case you’re a bit rusty on your Incognito trivia, the last time we heard from him he was most definitely taking all the “fun” out of “funeral”:

Richie Incognito was violent, incoherent and emotional before he was arrested at a funeral home in Arizona — with one witness saying the NFL lineman asked the staff to “cut his dad’s head off for research purposes.” …

That was after he was leading the NFL in low-level erratic behavior like mercilessly busting his teammates balls, firing his agent on Twitter, retiring and then unretiring. But that’s the guy Jon Gruden has decided to add to the mix of a roster that’s already the football equivalent of the nitroglycerine they used to let Chinese immigrants handle when they were building railroad tunnels through the Rockies.

And what is Gruden’s plan for stabilizing this explosive atmosphere? According to what he told Peter King, his solution is team-building through America’s most beloved game show, that’s what:

King: Burfict and Antonio had quite a history. Burfict knocked Brown cold in a playoff game. They hated each other. How about now?

Gruden: They’re good. We played Family Feud one day in our team meeting. We had three guys on one team, three guys on the other. Our version of Family Feud. Silver team and a Black team. The Silver team was Antonio Brown, Vontaze Burfict and I think we had Isaiah Crowell on the team. [2018 teams: Brown, Pittsburgh … Burfict, Cincinnati … Crowell, New York Jets.] You gotta try to get these guys to know each other. This is the only time that you can really do that. April, May, June. It’s almost like church. Everybody stand up. Shake a hand, introduce yourself to your teammates. Otherwise, Peter never gets to know Jon and Jon never meets Joe …

King: What happened in Family Feud? How was it?

Gruden: It was a helluva game. One of the questions was, ‘Who were the 1,100-yard rushers in the NFL last year?’ They nailed that pretty good, but they had a hard time with [Chris] Carson of Seattle. Another question: ‘Who do the Raiders play on the other side of the Mississippi?’ Last one was top designer brands clothing or jewelry. These guys were guessing Nike, Wrangler. They don’t know s— about fashion. But they did great. Got some laughs. These days, you gotta think outside the box.

Goddamn, how much would you pay to have been in that room? Gruden going full Steve Harvey on everyone. Brown and Burfict huddling together. “Joe Mixon! At the Jets! Ralph Lauren! Calvin Klein! Good answer!!!” Gruden doing the “Survey says!” and “Show me … Wrangler!!!” What a missed opportunity this was to share his management style to the world.

So this settles it. I’m petitioning … make that demanding, right now … that the NFL put the Raiders on “Hard Knocks.” They’ve got a storied franchise relocating to a city that’s never had football before and the timing couldn’t be more perfect. The league needs it.  Gruden needs it. HBO needs it. The nation needs it. I need it. If they don’t, I swear I will start some civil unrest until they capitulate. If they do, I’ll be needing a segment where Gruden pits Brown, Burfict and Incognito against each other in a game of “Jeopardy!” and I needed it five minutes ago.