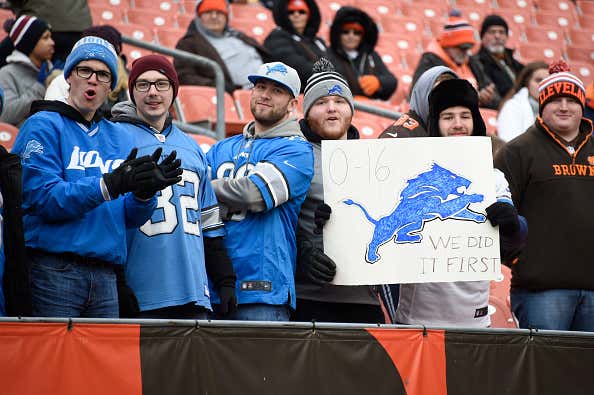 Just a jarring number to read. 10,000 days doesn’t even feel like a real thing. Like you could tell me that’s a decade, you could tell me that brought us all the way back to Ancient Rome. It’s just not how we traditionally go about tracking time over such a large period. The people in Detroit, however, clearly had this day circled on their calendars because holy moly is that an alarming amount of time to have passed between playoff wins. And unless Goodell announces some sort of emergency summer playoffs I think we’re looking at minimum 200 more days tacked on to that already large number.

January 5, 1992 was so goddamn long ago. I was two. TWO! Michael Jackson’s “Black and White” was at the top of the pop charts. HOOK, FATHER OF THE BRIDE, and BEAUTY AND THE BEAST were duking it out at the top of the box office. Like the animated BEAUTY IN THE BEAST was still a new thing, the live action adaptation has already come and gone in the time since the Lions have won a playoff game. Hollywood has recycled classics in the time it’s taken the Detroit Lions to manage a playoff victory.

And what’s worse is they’ve had chances. Nine chances to be more specific. This isn’t a drought like the Browns where they’ve only made the playoffs three times since ’92. Like they’ve been decent enough to get into the dance and then just get stonewalled instantly. Nine postseason births with wildly different rosters against completely different opponents, same result every single time. Unfathomable level of ineptitude.

And yet somehow, some way, the Cincinnati Bengals have found a way to be worse. How in the fuck have the Bengals not won a playoff game since ’91? And how have they appeared in less playoff games (7) than the Lions? The Lions! The Bengals are worse that the Lions! All this information has made me quite upset. I need to go take a walk.